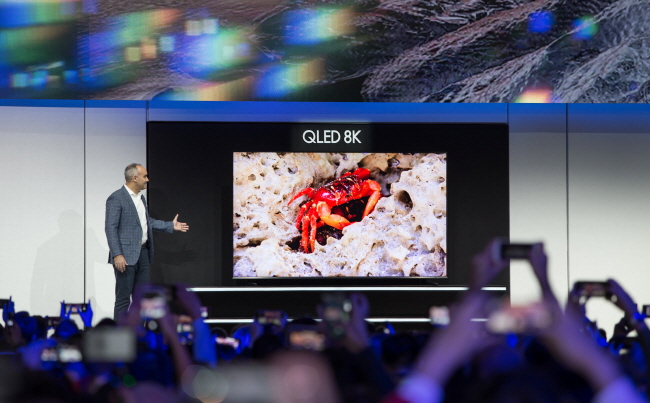 SEOUL, Mar. 25 (Korea Bizwire) — As South Korea’s tech titans launch their latest and greatest TVs, they are, once again, in fierce competition to promote their own cutting-edge screen technologies and expand their market presence.

Consumers who want the best picture quality TVs available will look to OLED TVs by LG Electronics Inc. and QLED models by Samsung Electronics Co. which cost several thousand dollars, with prices varying depending on the size and features.

Unlike most LED TVs, which require an array of lights behind the layer of pixels, each pixel on an OLED generates its own light, meaning that pixels can turn themselves off completely to make the screen totally black. This can lead to superior contrast and energy savings.

While OLED and QLED TVs each have their own advantages and disadvantages in different settings, the latest industry data show that they are in a very tight race when it comes to sales amount and unit in the global market.

According to market tracker IHS Markit, global sales of QLED TV stood at 2.68 million units in 2018, above OLED TV’s 2.51 million.

QLEDs posted solid growth in the October-December months during the global shopping season, highlighted by Black Friday. Some 1.1 million sets of the premium TV were estimated to have been shipped during the fourth quarter alone, compared with 895,000 for OLED TVs.

Samsung has been pitching its QLED lineup at big discounts in North America. It is planning to release QLED TVs, this year, after the launch at home and in Europe in the fourth quarter, offering promotions in major markets. 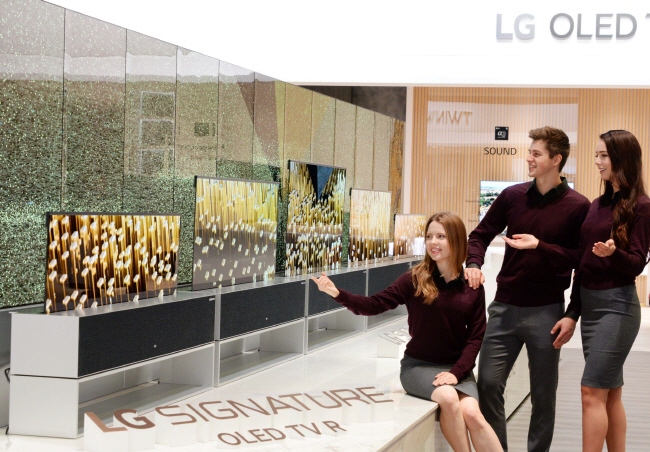 As the neck-and-neck data indicate, companies are betting that this year is a critical time to shape the industry’s landscape for the premium-end market. Samsung and LG are aggressively pitching their own technologies in industry shows and showcase events, sometimes making the rival’s products look less attractive.

Last month, Samsung Electronics cited the 2018 sales units, saying its TVs are better positioned to win a bigger chunk of the premium market this year.

During the event, Samsung demonstrated its 8K QLED TV equipped with upgraded artificial intelligence capability, right next to LG’s OLED TVs in different settings. Samsung says its new lineup will have an image resolution four times more vivid than its 4K counterparts.

“QLED TVs are based on LCD technology, and are structurally different from OLED TVs that deliver true black color,” Brian Kwon, the head of LG Electronics’ home appliance division, said during a 2019 TV lineup showcase event on March 6. “In terms of sales units, QLED TV surpassed OLED TV, but OLED TV was ahead in terms of sales amount.”

LG said over 1 million units of its OLED TVs were sold in North America and Europe last year, accounting for 70 percent of its premium market sales. The firm expected the global OLED TV market in the two regions to rise from 1.7 million last year to top 2 million for the first time this year, projecting upbeat prospects for OLED lineup in the key markets.

LG has, moreover, stressed that it has been expanding its OLED alliances with leading TV makers to set its next-generation standard in the premium TV market, which includes about 15 manufacturers, including Bang & Olufsen, Changhong, Panasonic, Philips, Sony, Toshiba and others.

QLED alliance, a front against OLED, now has Samsung, TCL, Vizio, and Hisense. Hisense has announced plans launch its first OLED TV this year to offer a choice of the two leading technologies.

Market watchers say the competition will intensify this year as companies target the more profitable premium TV segment amid a supply glut in the LCD panel sector.

“South Korean tech companies are expected to beef up investment in the premium TV technologies to widen the gap with Chinese display manufacturers so they can find new growth momentum,” Soh Hyun-chul, an analyst at Shinhan Investment & Securities, said.