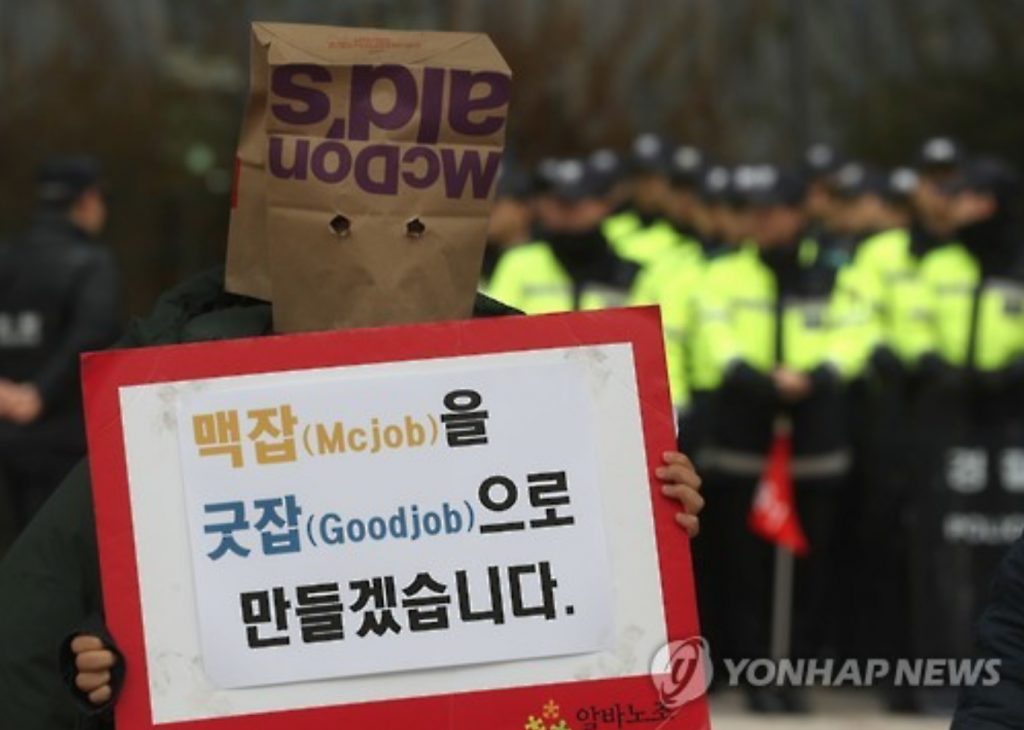 According to union members, McDonald’s infamous labor intensity is no secret among part-timers, and they are even referred to as “McSlaves.” (image: Yonhap)

Taking place Wednesday in front of the McDonald’s headquarters building in Seoul was the inauguration ceremony of a new McDonald’s labor union of current and former part-timers.

The union has existed since 2014 under the umbrella of the Alba Organization, Korea’s labor union for part-time workers, but it wasn’t until Wednesday that the union was officially announced by its members.

The members plan on initiating a collective bargaining process, demanding a wage increase, and if the company refuses, they’ll file a lawsuit for unfair labor practices.

According to union members, McDonald’s infamous labor intensity is no secret among part-timers, and they are even referred to as “McSlaves.”

“Our goal is to raise the wages paid to part-time employees and ease the work intensity,” said an official. “If the company fails to respond by the end of the month, we’ll sue them for labor malpractice.”

The union announced the results of a survey on 100 former and present McDonald’s part-timers, revealing that 78 percent of the respondents were not satisfied with their wages, which are close to Korea’s minimum hourly wage of 6,470 won ($5.58).

Of those surveyed, 64 percent said that they were forced into emotional labor, while 68 percent said they suffered injuries at work, only 14 percent of whom were compensated by the franchise.

In response to the union’s claims, McDonald’s said that it “respects the rights of a union guaranteed by law,” and that it will evaluate the matter if the union makes a legitimate request that meets the legal prerequisites of forming a labor union.

However, it added that the company “has yet to confirm the actuality of the union members’ status as McDonald’s employees.”