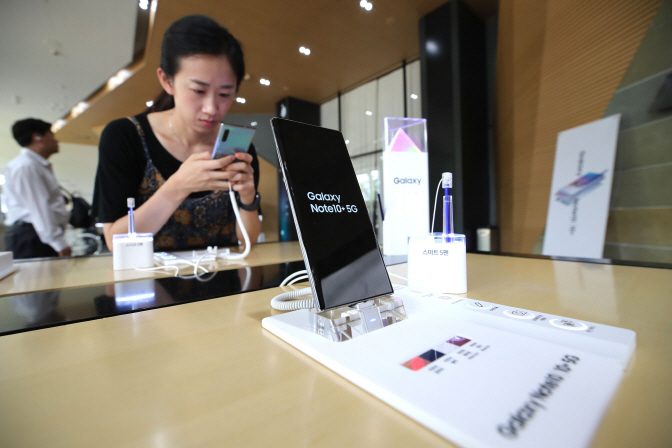 Although consumers can buy unlocked 5G smartphones and subscribe to less expensive LTE mobile plans, they can’t benefit from the carriers’ subsidies that come along with 5G subscription plans. (Yonhap)

The Korean tech giant last week launched the Note 10 only in 5G models in the domestic market starting at 1.25 million won (US$1,030), while offering the phablet both in LTE and 5G versions abroad.

The Ministry of Science and ICT has recommended Samsung offer an LTE version of the Note 10 and demanded an answer on its stance by Friday.

But Samsung is unlikely to add the Note 10′s LTE model as it would require additional costs and time to design a smartphone optimized for the domestic network, while there is lack of incentives, according to an industry source with knowledge of the issue.

“As the Note 10 was made for 5G users in the domestic market, Samsung has to restart the production process with new parts and test its compatibility with the LTE network, which could take about two to three months,” the source said.

“And it goes against Samsung’s efforts to expand share in the premium smartphone market with 5G smartphones.”

Compared with other markets, there is less motivation for Korean consumers to buy the Note 10′s LTE version because local carriers are aggressively marketing 5G smartphones with large subsidies to expand their user base.

Although consumers can buy unlocked 5G smartphones and subscribe to less expensive LTE mobile plans, they can’t benefit from the carriers’ subsidies that come along with 5G subscription plans.

Samsung declined to comment before delivering its official stance to the government.

According to government data, the number of 5G subscribers in South Korea has surpassed 2.5 million, rising at the fastest pace in the world since the network’s rollout in early April.