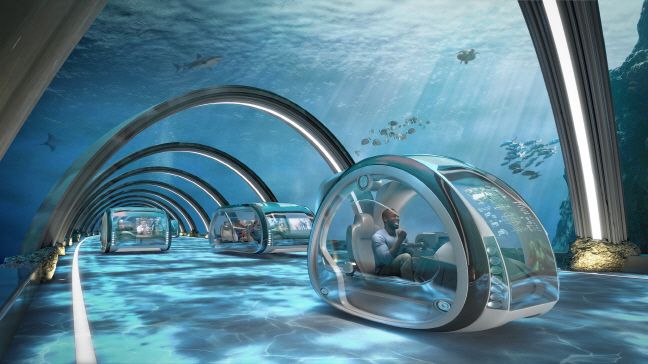 The report predicts that by 2069, rocket transport will bring people from London to New York in just 40 minutes, and drone-shaped flying taxis and buses will become a part of everyday life. (image: Samsung Electronics Co.)

SEOUL, Sept. 2 (Korea Bizwire) — Flying taxis and buses, a sleepover in space, self-cleaning homes, and internet that connects to the brain.

These are part of the landscape that six of Britain’s leading academics and futurists have drawn for the future in 50 years’ time, published in Samsung KX50: The Future in Focus report, funded by Samsung Electronics Co.

Samsung published the report, along with photos and videos, on the Samsung Newsroom U.K. website recently.

The report was drafted to commemorate the grand opening of Samsung King’s Cross (KX), a large-scale experience center in downtown London.

The report predicts that by 2069, rocket transport will bring people from London to New York in just 40 minutes, and drone-shaped flying taxis and buses will become a part of everyday life.

Aquatic highways, space hotels, artificial organs printed in 3D, and connecting the brain with the internet will also become possible in 50 years’ time.

“50 years ago we could have never predicted such changes to the way we live, work, travel and eat,” said Tanya Weller, Director of Samsung Showcase, KX.

“Samsung has always been a future-facing company, we exist to create human-driven innovations that defy barriers to progress.”

Samsung KX is scheduled to open early next month. It is a IT complex not only for Samsung products, but also for experiencing overall IT technology and culture, similar to Samsung 837 in New York.