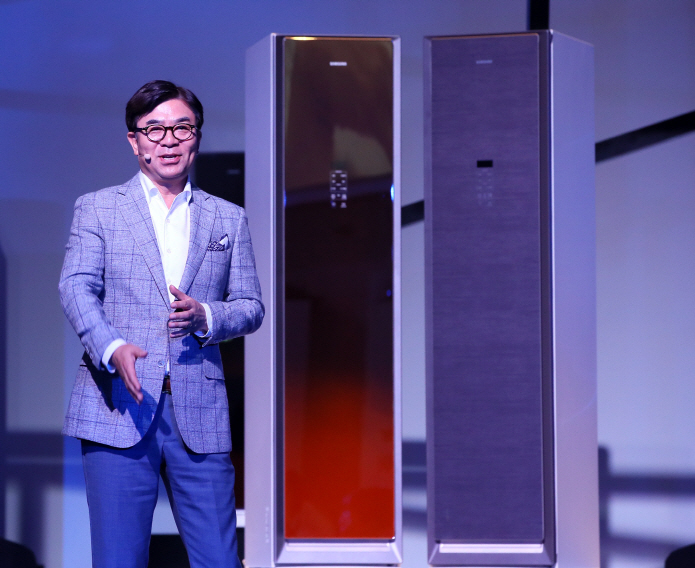 SEOUL, Aug. 21 (Korea Bizwire) — Samsung Electronics Co. on Tuesday showcased a new garment care appliance that allows users to remove dust and odor at home, seeking to take a slice of the market from LG Electronics Inc.’s Styler, which has dominated the segment.

The tech giant’s release of a clothes refresher apparently came as the demand for such products has been increasing in South Korea. Industry sources said the domestic market for garment-care appliances, which was estimated at 30,000 units in 2015, is anticipated to soar to 300,000 units this year.

Samsung said the Air Dresser is comprised of various know-how of its home appliances, including the steam technology of its washers, odor treatment system of refrigerators and filtration of air purifiers.

Compared to its rival, Samsung Electronics said its product stands out as it focuses on cleaning garments of fine dust, which recently emerged as a major concern for South Korean customers.

The Air Dresser utilizes air and steam, which are sprayed at the top and the bottom, to effectively remove dust and odor from garments.

Samsung said the Air Dresser comes with an exclusive hanger that is capable of cleaning the inside of clothes.

Samsung said the product produces less noise and vibration as it cleans clothes by spraying air. It applies different air strength depending on the materials of clothes, providing more customized cleaning cycles.

The company added the Air Dresser can remove 99 percent of dust on clothes in 25 minutes.

The Air Dresser is also significant as it comes with a filtration system so that dust and odor do not remain inside the product and contaminate other clothes.

Choi Cheon-woong, a medical professor of Kyunghee University, claimed the Air Dresser will be beneficial in terms of health since fine dust, which has become a problem in South Korea, can be removed. Exposure to the dust can lead to health issues.

“Millennials have emerged as core consumers of our home appliances,” Kim said. “It was our duty to study their lifestyles and deliver experiences and values they seek.”

“Samsung Electronics will deliver new changes to the traditional home appliances market through innovation and strive for the realization of true smart homes through Internet of Things and artificial intelligence technologies,” the executive added.

The company then said it will bolster the connectivity among different home appliances through its SmartThings app.

Samsung also introduced the My Closet service, which delivers information on clothes such as recommended courses on the Air Dresser, by scanning their bar code.

The tech giant said the service has currently joined forces with six brands under Samsung C&T Corp., such as Bean Pole and 8Seconds, with more collaboration to come in the future.

The product will be released in four colors: gold, brown, rose and white.

The official launch is slated for September, with the company starting preorders Tuesday. Samsung said the price has been set at between 1.74 million won (US$1,550) and 1.99 million won.

Samsung said it also aims to release the product in overseas markets, including to business clients such as hotels in the United States.

Kim added that the company does not have an immediate plan to implement voice recognition systems in the clothes refresher.

“Would it be faster to press the button on the product, or to give a voice command to the Air Dresser? It is not a matter of technology, but an issue of which methods can bring more benefits to users,” Kim said.

LG Electronics earlier said it will showcase the LG Styler ThinQ later this month in Germany, equipped with a voice-recognition system.