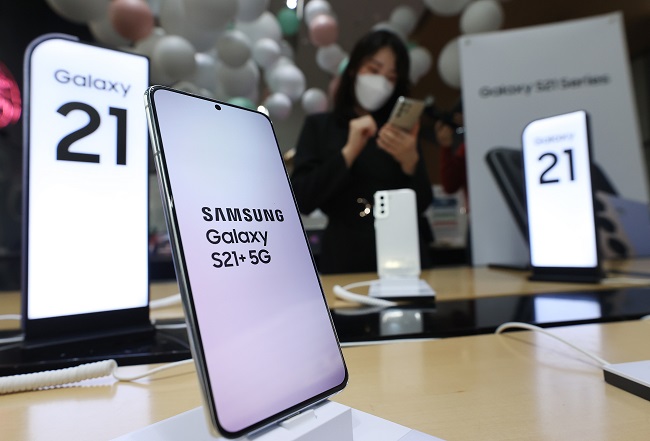 SEOUL, March 9 (Korea Bizwire) — Samsung Electronics Co. is expected to recapture the top spot in global smartphone production in the first quarter of the year, a report showed Tuesday, with the release of its new flagship smartphone.

The South Korean tech giant is estimated to produce 62 million smartphones in the January-March period and account for 18.1 percent of global smartphone production, according to market researcher TrendForce.

“Moving to the first quarter of 2021, Samsung has released the new lineup of its flagship Galaxy S21 series in advance so as to maintain its market share in the high-end segment,” TrendForce said.

“At the same time, Samsung has adopted promotional pricing to boost the sales of its latest devices.”

Apple Inc. is expected to drop to the second spot with 54 million units, or a market share of 15.8 percent, in the first three months of 2021, according to TrendForce.

The U.S. tech giant was the leading smartphone maker in the fourth quarter of 2020 after it rolled out 77.6 million units of iPhones, beating Samsung’s production of 67 million units.

China’s Xiaomi Corp. is projected to become the third-largest smartphone producer in the first quarter of 2021, with a share of 15.2 percent.

Oppo, which includes OnePlus and Realme devices, is expected to become the top fourth-largest player with a share of 15.1 percent, TrendForce added, followed by Huawei Technologies Co. with 7.7 percent.

Global smartphone production is likely to reach 342 million units in the first quarter of 2021, up 25 percent from a year ago, and a quarter-on-quarter decline of 6 percent, TrendForce said.

“Historically, smartphone production tends to experience a quarter-on-quarter drop of around 20 percent for the first quarter as demand collapses from the peak-season level of the fourth quarter of the preceding year,” it said.

“However, the performance of the first quarter of this year is expected to defy seasonality.”

For the whole of 2021, the market researcher expected the global smartphone production volume to reach 1.36 billion units, up 9 percent from a year ago.

Samsung was again expected to top the annual ranking of smartphone brands by production, TrendForce said, though it was expected to face increasing challenges from others.

“The main focus of Samsung’s sales efforts will still be on the Galaxy A series that encompasses models across the high-end, mid-range, and low-end segments of the price spectrum,” it said.

“To effectively compete against Chinese brands that boast better price-performance ratio for their devices, Samsung will maintain high specifications and a price advantage for Galaxy A devices.”