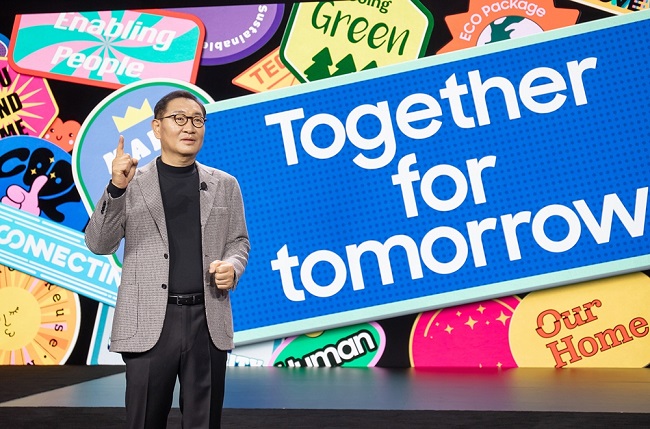 Han Jong-hee, Samsung Electronics Co.’s vice chairman and the head of the Device eXperience (DX) division, delivers a preshow keynote speech at Venetian Palazzo on Jan. 4, 2022, in this photo provided by the company.

LAS VEGAS, Jan. 4 (Korea Bizwire) — A high-ranking executive of Samsung Electronics Co. underlined the importance of customized devices and personalized spaces, as well as sustainable technology, in his keynote speech at the Consumer Electronics Show (CES) in Las Vegas on Tuesday.

Han Jong-hee, the tech company’s vice chairman and the head of the Device eXperience (DX) division, delivered the preshow keynote speech at Venetian Palazzo at 6:30 p.m., presenting the tech giant’s vision for and direction of technological development in years to come under the theme of “Together for Tomorrow.”

He said customized devices and personalized spaces have become ever more important amid the prolonged pandemic and reiterated the company’s commitment to creating new and meaningful experiences for its customers through continued innovation.

Han also said technological breakthroughs and innovation should not come at the expense of the environment and that Samsung has a responsibility to protect the planet for a better future for the generations to come.

“I’m excited for you to be a part of our vision to see how innovation can create positive change, and to join us and work together for tomorrow,” he said. “These developments will make sustainability part of your product experience, enabling you to live a more sustainable life.”

The CES, the world’s biggest consumer electronics show, slated from Wednesday to Friday in Las Vegas, served as a prominent stage for Han to make his global debut as the new chief of the tech giant.

In early December, he was promoted to vice chairman and tapped to lead the newly merged DX division — which combined the consumer electronics, and IT and mobile communications businesses.

Samsung will continue working to achieve a customizable future of personal technologies, he said, to empower users to tailor their device to their taste and needs, like the Galaxy Z Flip3 Bespoke Edition.

He also laid out a vision for a secure and open ecosystem that can help users stay connected and integrate their smart home devices. 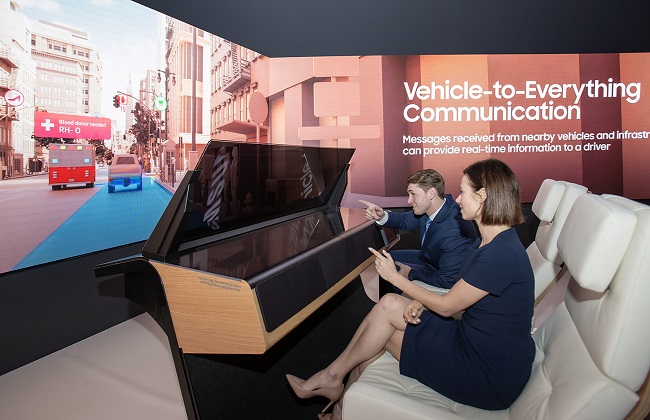 Another major issue Han emphasized was the continued development of environmentally sustainable technology, such as its eco-conscious “green chips.”

Han unveiled a plan to join hands with Patagonia, an American company that sells outdoor apparel and gear, in developing technology to reduce microplastic particles that are damaging the oceans.

As part of efforts to combat climate change, by 2025, Samsung plans to make all of its TV and phone chargers consume almost no power when they are not being used, he said.

On another front, the company has collected more than 5 million tons of e-waste since 2009 and launched Galaxy for the Planet last year, designed to minimize devices’ environmental footprints throughout their life cycles.

Han’s speech came as other big brands, such as Microsoft, Google and Facebook, decided to cancel in-person participation in the CES over omicron fears and as the event’s organizer stepped up health precautions, including proof of vaccination, a mask mandate and on-site testing for the coronavirus, for the safety of tens of thousands of people from around the globe.