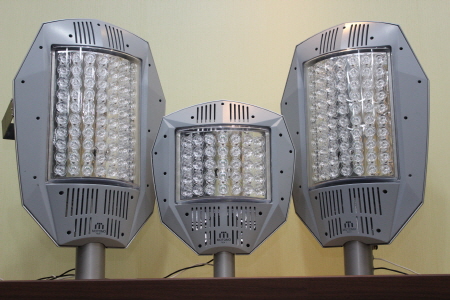 A city in Kazakhstan will replace all its street lights with LED lamps supplied by a Korean company. (image credit: Save Semiconductor)

GOYANG, Korea, Oct 19 (Korea Bizwire) – A city in Kazakhstan will replace all its street lights with LED lamps supplied by a Korean company. Save Semiconductor, a Korean manufacturer of environmentally friendly LED lighting devices, said on October 17 that it signed an agreement with HK E&E which in turn agreed to build an LED lamp assembly plant jointly with Kazakh state-run company Tobol near the city of Kostanay in northern Kazakhstan. Under the terms of the contract, Save Semiconductor will supply 150,000 high-efficiency street lamps and security lights.

This is an important milestone because it is proof that Korea’s LED lighting technology is well received overseas, in addition to the sales achievement of 120 billion won for the mid-sized company. The LED lighting devices manufactured by Save Semiconductor are capable of withstanding high temperature fluctuations and extremely low temperatures of 40 degrees Celsius below zero.

HK E&E will expand the LED lighting supply business to the country’s private sector after 2017 when it makes a debut in an exposition to be held in the Kazakh capital Astana. Until then, it will keep supplying the devices to the public sector only.

Jeon Young-suk, president of Save Semiconductor, said, “We believe this is a great opportunity for us to move into markets in Russia and surrounding nations, by taking advantage of the strong sales networks of HK E&E.” The company is currently negotiating with local partners of Indonesia and China to supply LED lighting devices to these potentially large markets.