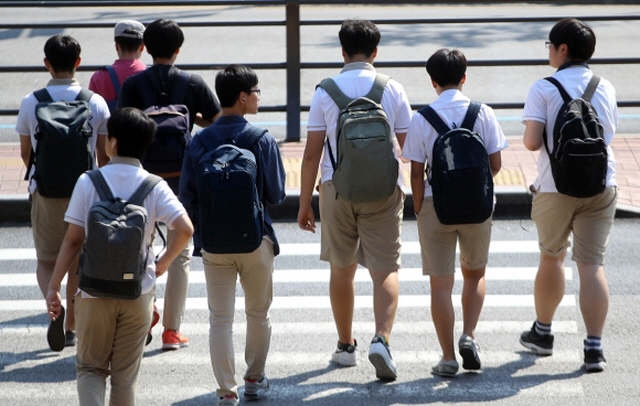 In the survey by the education ministry, 1.7 percent of students said they suffered violence in schools in 2022, up 0.6 percentage points from last year, when most schools shifted classes online due to COVID-19.

The number is 0.1 percentage points higher than in 2019, before the pandemic.

About 3.21 million students, or 82.9 percent of the total, from fourth graders of elementary schools to high school seniors across the country, excluding North Jeolla Province, participated in the survey.

The percentage of students experiencing violence was 3.8 percent for elementary schools, 0.9 percent for middle schools and 0.3 percent for high schools, up from 2.5 percent, 0.4 percent and 0.18 percent, respectively, in 2021.

By type of violence, 41.8 percent reported verbal abuse, followed by physical violence with 14.6 percent, ostracism with 13.3 percent and cyberbullying with 9.6 percent.

Ostracism and cyberbullying decreased from 14.5 percent and 9.8 percent, respectively, reported in 2021, while physical violence increased from 12.4 percent in 2021.

“With schools returning to normalcy, now is an important time to prevent violence in schools.” Vice Minister of Education Jang Sang-yoon said.

“We will analyze the recent patterns and prepare a pan-governmental implementation plan to prevent school violence by February next year,” he said.