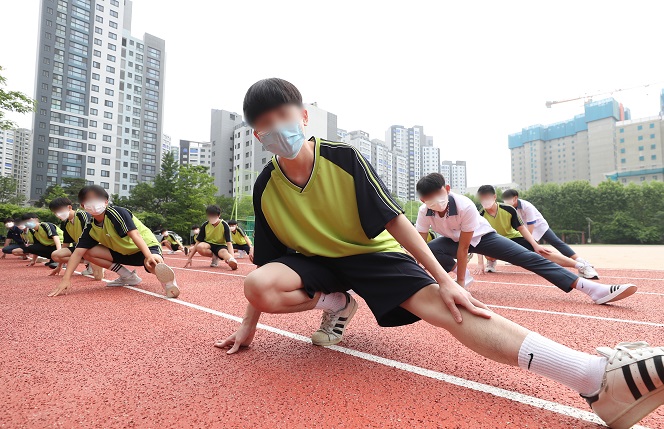 SEOUL, June 3 (Korea Bizwire) — More South Korean students returned to classrooms on Wednesday as part of the government’s phased reopening plan, but worries linger over the continued spread of the new coronavirus.

The reopening comes at a time when the country is wrestling with a spike in infections traced to small Protestant churches and cram schools in Seoul and its adjacent areas despite a slowdown in cases tied to bigger clusters, such as a nightlife district and a logistics center.

The country reported 49 new coronavirus cases on Wednesday. Of them, 48 are from the great Seoul area, according to the Korea Centers for Disease Control and Prevention (KCDC).

School is back in session for about 1.78 million more students — in the first grade of high school, second grade of middle school and third and fourth grades of elementary school.

This brought to 4.59 million the total number of students who have returned to school in three phases. The fourth, and last, phase of school resumption is set for Monday.

But they do not all go to school simultaneously. Each school is allowed to run a different schedule to ease classroom crowding.

The South Korean government started reopening schools on May 20. Under the plan, 440,000 high school seniors began in-person classes, followed by 2.37 million students in other year groups, including kindergartners.

According to top educational officials, the reopening is inevitable at a time when a great deal of uncertainty over COVID-19 is holding back normal life activities, including those of students.

They believe staying at home and learning through virtual classes is insufficient for the social and mental development of young Koreans. 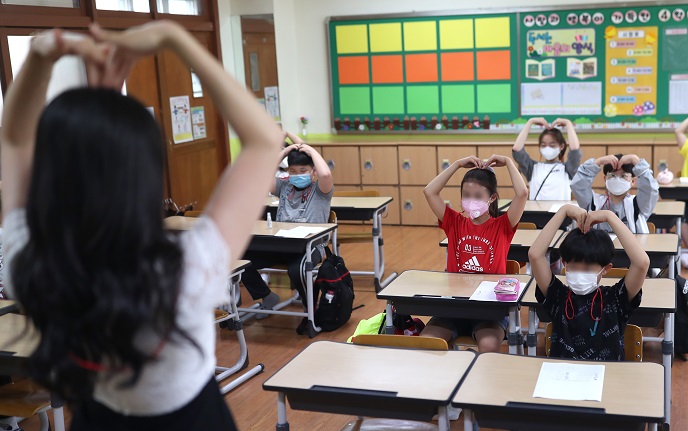 Students exchange greetings with their teacher while seating in a zigzag arrangement at Samsung Elementary School in Gimhae, 449 kilometers southeast of Seoul, on June 3, 2020, when South Korea implemented the third phase of school reopening for high school first-graders, middle school second-graders and elementary school third- and fourth-graders. (Yonhap)

But schools, cram schools and business establishments frequently visited by students have reported a steady stream of infection cases.

The operation of cram schools — which have mostly stayed open despite government warnings — is particularly worrisome.

According to the Ministry of Education, 78 COVID-19 patients have been confirmed at 42 private academies since February.

To prevent a potential viral outbreak there, the government is inspecting their safety conditions from June 1-12.

So far, 10,356 cram schools out of 128,837 nationwide were found to have failed to comply with the state quarantine guidelines.

Separately, the government plans to revise a relevant law, based on which the education ministry can punish a private academy that fails to abide by strict quarantine measures, with a fine or a forcible business closure.

It’s been already running the pilot program at risky venues, including karaoke facilities, bars and churches.

Even with persistent outbreaks, the ministry maintains its position that the coronavirus is under control, with the government’s stringent quarantine protocols and testing and tracing capabilities.

The number of schools that switched back to online classes due to COVID-19 came to 519 on Wednesday. It was 838 on last Thursday, a day after schools reopened for more than 2.3 million pupils.

Only five students and three school administrators showed symptoms of COVID-19 at schools, and subsequently tested positive since May 20. 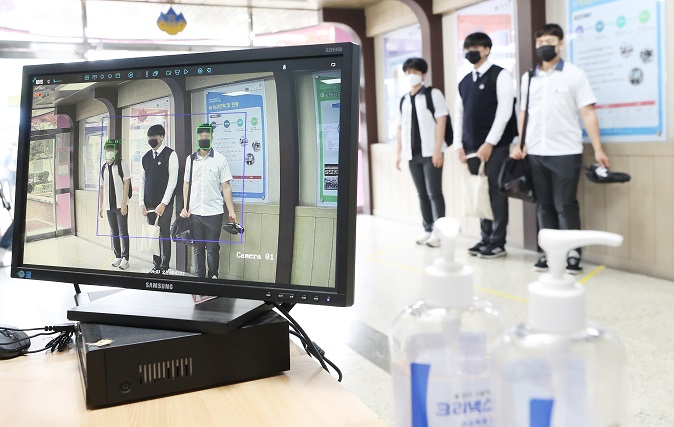 High school pupils have their body temperatures checked before heading into classrooms at Gwacheon High School in Gwacheon, south of Seoul, on June 3, 2020. (Yonhap)

“We understand that there are worries about the reopening of schools amid clusters of infections emerging in the capital area,” Prime Minister Chung Sye-kyun said during a response meeting Wednesday.

“But the current difficult situation should not stand in children’s way for their futures and hopes,” he said, “Which explains why we opened schools in cloth tents in the middle of the (Korean) war.”

He also emphasized that there hasn’t been any transmission case reported at schools.

“In May, we had 50 student infection cases, but none of them contracted the virus at school,” he said, adding, “It shows that every party involved puts priority on the prevention of virus spread at schools.”

Last week, the government toughened measures to minimize classroom crowding in Seoul and the surrounding area.

It also strongly advised businesses frequented by teenagers to remain closed until June 14. If they choose to remain open, they have to make sure that patrons fill out entry logs, wear masks and maintain at least a 1-meter distance from one another.

Some parents have misgivings about sending their kids to school.

Although the figure is not deemed large, it should not be overlooked because young people with mild symptoms can silently carry the virus and infect other family members who are vulnerable.

On a now-closed petition posted on the presidential Cheong Wae Dae, more than 255,000 people asked the government to delay the reopening of schools.

In another ongoing petition posted by a teacher, more than 164,000 people have supported the delay.