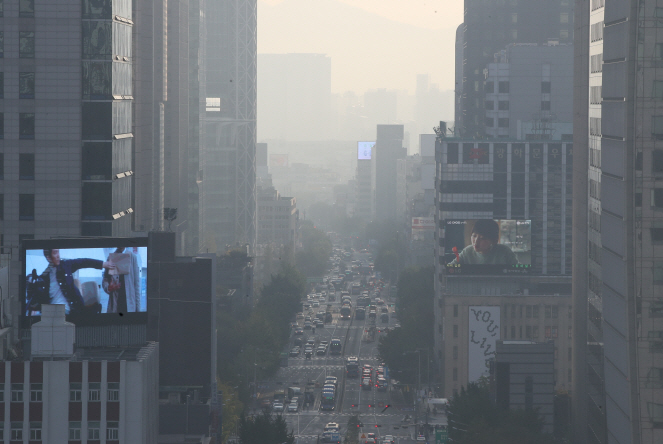 A set of preliminary measures are being taken in the public sector to cut fine dust in a proactive manner when there is a high possibility that authorities could launch steps to cut air pollution a day later.

Seoul, the western city of Incheon and Gyeonggi Province, which surrounds the capital, are subject to the measures.

The program took effect as the daily average density of ultrafine dust is forecast to go beyond 50 micrograms for the second straight day.

Under the measures, civil servants and officials at public institutions in those areas are required to leave their cars at home based on odd-even number plates.

But vehicles involved in quarantine efforts to contain the potential spread of African swine fever will be an exception.

In the morning, the level of ultrafine dust was considered moderate, but it is forecast to rise in the afternoon, affected by fine dusts to be carried from China and North Korea, according to government officials.

Under the current circumstances, it is not certain whether the government will take all-out measures to cut fine dust pollution on Tuesday.

In March, South Korea designated fine dust as a social disaster as the intensity and frequency of the air pollution has increased in recent years.

A large portion of the fine dust is believed to blow in from China, but exhaust gas emitted by diesel-fueled cars is also blamed for increasing particulate matter.

The country also launched its special crackdown on vehicle exhaust gas on Monday as part of efforts to reduce fine dust pollution in the winter season.

The Ministry of Environment said the crackdown will run until Nov. 15 in Seoul and 16 metropolitan cities, with the focus on trucks, buses and vehicles used by private education institutions to transport students.

It said 17 provincial and city governments will concentrate on monitoring exhaust gas emitted by diesel-fuel cars.

The Korea Environment Corp. plans to crack down on emissions by gasoline and liquefied petroleum gas-powered vehicles.

Under the related law, all vehicle drivers should comply with the authorities’ crackdown. If not, they could face up to 2 million won (US$1,696.35) in fines.

A car whose exhaust gas tops a permissible level will be ordered to inspect the vehicle for improvement within 15 days of the crackdown.

Authorities can order drivers to suspend the operation for 10 days at maximum if they do not follow the order. The ministry said drivers can face up to 3 million won in fines if they ignore the suspension order.