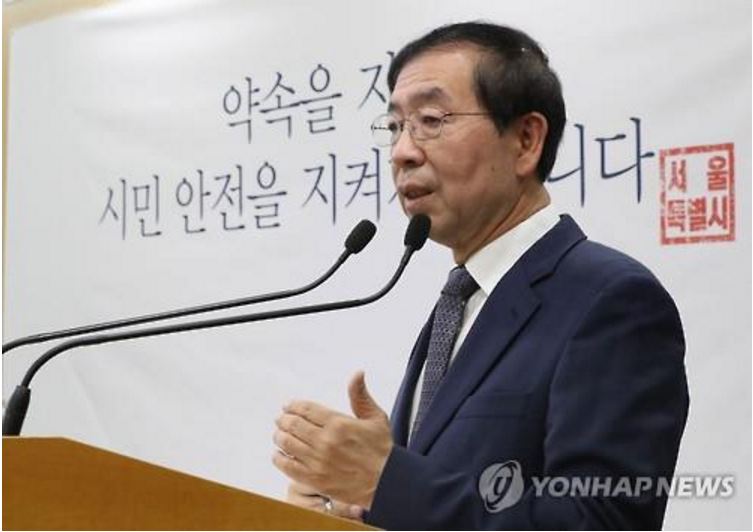 The mayor of Seoul, Park Won-soon, announced that the city would take responsibility for registering sex slaves’ records with UNESCO’s ‘Memory of the World’ programme. (image: Yonhap)

SEOUL, June 24 (Korea Bizwire) – The mayor of Seoul, Park Won-soon, announced that the city would take responsibility for registering sex slaves’ records with UNESCO’s ‘Memory of the World’ programme if the Korean government cancels its own plans due to budget cuts.

UNESCO’s Memory of the World Programme was initiated to protect the “documentary heritage of humanity against collective amnesia and neglect”. The Japanese government’s “apology” to comfort women has only been accepted by the Korean government, not the victims themselves.

On his social media broadcast ‘Won-soon’s X-File’, Park said, “The government has already set its budget, but will not support the project. I believe the records of sex slaves must be kept and registered with UNESCO as a Memory of the World.”

“The process does not require a big expenditure. The government must carry out the plan, but the city of Seoul will take its place if the national government takes no action,” he added.

According to Mayor Park, the city of Seoul is collecting and organizing voice and video records of the victims, historical materials, and related documents. The collected records will be registered with UNESCO as a Memory of the World.

He also mentioned the painful memories of other countries that were involved in World World II, and introduced a plan to construct ‘The Site of Memory’ on the grounds of the old official residence site of the Japanese Resident General in Namsan, Seoul. Once the city park board reviews the plan, the construction will begin and a peace monument will also be built.

‘The Site of Memory’ will be built to remember “comfort women” victims. The site marks the place where the Korea-Japan Annexation Treaty was forcibly signed. Government employees in South Korea collected 40 million won in April to donate to the construction efforts.

“I am positive that ‘The Site of Memory’ will recover these women’s honor and teach our future generations the misdeeds of the Japanese Army during wartime,” said Mayor Park. The city of Seoul and private organizations have formed a special committee for the construction of this dedicated site.

Mayor Park also mentioned that the city’s ‘Youth Allowance Program’, which was recently rejected by the Ministry of Health and Welfare, would be announced publicly by the end of this month as planned.

The city of Seoul will make an announcement for a pilot program on June 30, and accept applications from July 1 to 15. The actual allowance will be paid out in the last week of July or the first week of August.