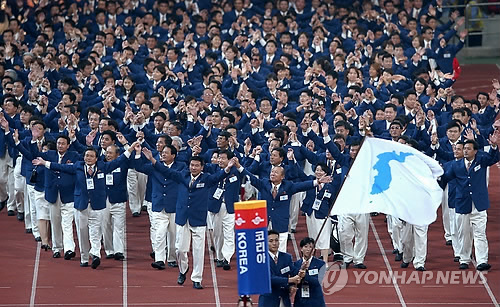 As part of such plans, Seoul will seek to hold a soccer game and “ssireum,” or traditional Korean wrestling matches, with Pyongyang. (image: Yonhap)

SEOUL, April 21 (Korea Bizwire) – South Korea said Tuesday it will seek to hold a variety of sports and cultural events with North Korea this year to mark the 70th anniversary of Korea’s liberation from Japan’s colonial rule.

South Korea plans to propose the creation of an ad hoc committee to the North to prepare for joint events to commemorate the anniversary this year, the unification ministry said in a report to the National Assembly.

As part of such plans, Seoul will seek to hold a soccer game and “ssireum,” or traditional Korean wrestling matches, with Pyongyang, it added.

It also plans to hold performances to be joined by the two Koreas’ musicians and academic events involving an ongoing project to publish a joint dictionary of their language.

The Seoul government said it will also try to induce North Korea to attend and take part in two international sports events to be held on South Korean soil — the Gwangju Universiade in July and the International Military Sports Council World Games in October.

It also will push to consult with North Korea to launch the creation of a peace park in the Demilitarized Zone (DMZ) bisecting the two Koreas this year.

The plan to set up the ecological park in the DMZ was first drawn up in 2013 by South Korean President Park Geun-hye in a bid to facilitate peace on the Korean Peninsula.

The two Koreas are the only remaining divided countries in the world after fighting each other during the 1950-53 Korean War.