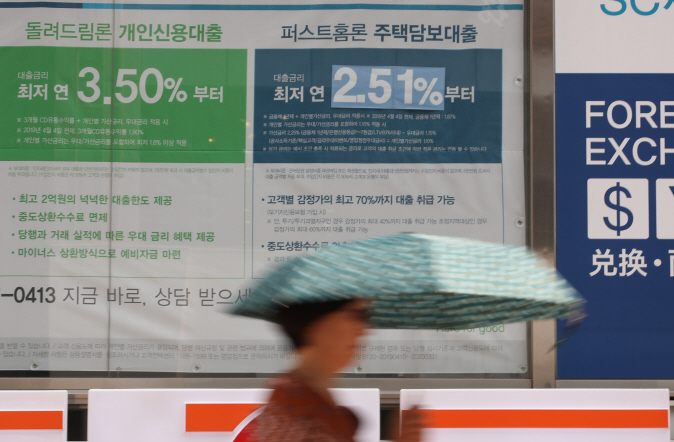 The bulletin of a Seoul bank, which informs customers of annual rates for loans. (Yonhap)

SEOUL, March 5 (Korea Bizwire) — In the fourth quarter of last year, loans extended to businesses in the service sector, mostly taken out by self-employed people, rose to the largest amount ever.

This seems to be the result of small wholesale and retail companies turning to loans amid sluggish domestic demand.

Outstanding loans to the service sector reached 741.9 trillion won as of the end of December last year, up 22.7 trillion won (US$625.9 billion), or 9.6 percent, from three months earlier, according to data released Wednesday by the Bank of Korea (BOK).

The increase was the largest since 2008 when related statistics began to be compiled. The growth rate was also the highest since a rate of 11.1 percent was posted in the first quarter of 2009.

As the service industry has many self-employed people working in the food, lodging, and wholesale and retail industries, they are believed to have taken out loans due to worsening business conditions.

The increase in the number of people who entered these industries with low entry barriers also affected the situation.

In the fourth quarter of last year, 6,738 new corporations were created in the wholesale, food and lodging sectors, compared with 6,172 in the third quarter.

There are also concerns that some of these loans could turn sour as more self-employed people are indebted to nonmonetary institutions.

“The overall soundness of loans for the self-employed is generally good, but low-income self-employed people cannot afford to withstand the business slump, which could quickly deteriorate in the event of an economic slowdown,” the BOK said in a report in late December of last year.