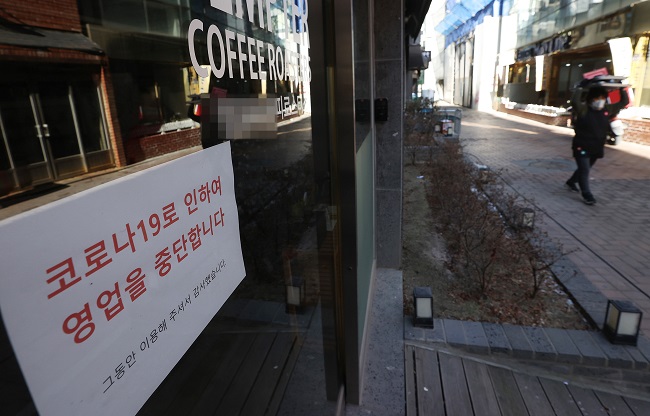 This file photo, taken on Jan. 29, 2021, shows a sign announcing a business closure over the pandemic put up at a store in Seoul’s shopping district of Myeongdong. (Yonhap)

Service output in Seoul — home to about one-fifth of the country’s 51.6 million population — gained 1.1 percent in 2020 on the back of robust gains in the financial and property sectors amid skyrocketing stock and housing prices.

The country’s service sector was hit hard by the COVID-19 pandemic as people refrained from visiting shops to avoid infection risks.

Jeju Island suffered the biggest fall in retail sales with a 26.9 percent on-year decline as demand for duty-free products was dented by the pandemic.

Gyeonggi Province that surrounds the capital reported a 9 percent on-year gain in such products on increased production of electronics goods and chips.

But industrial production in Seoul fell 14.7 percent last year, the sharpest decline among 17 cities and provinces, the data showed.