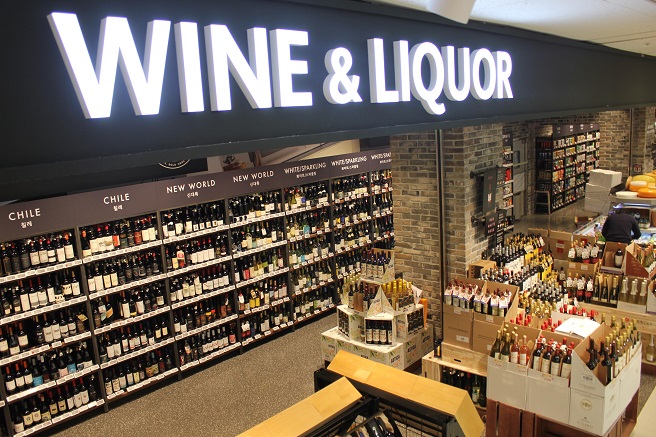 This file photo shows the wine section of a retail outlet in Seoul. (Yonhap)

SEOUL, April 13 (Korea Bizwire) — South Korea’s top two retailers — Shinsegae Group and Lotte Group — are going beyond retail to jump into the whisky and wine markets, which have been seeing rapid growth since the onset of the COVID-19 pandemic.

Lotte Chilsung Beverage Co. announced in a report released early this year that it will expand its production of whisky, recruiting employees and signing contracts with whisky experts from Scotland to set up a whisky brewery.

The company reportedly plans to build a brewery on one of the parcels of land that it currently owns. Construction is expected to begin next year at the earliest.

Shinsegae L&B Ltd. also plans to put a start to the whisky business as it is now recruiting experienced employees, with a goal of setting up breweries of its own.

Both companies are expected to compete in the wine market as well. Shinsegae Group purchased 299.6 billion won (US$243 million) of real estate in relation to the Shafer Vineyard in the U.S. last February.

Its subsidiary, Shinsegae L&B, plans to take the offensive by expanding the number of its Wine and More stores and introducing new series of wines including those from the Shafer Vineyard.

Lotte Chilsung Beverage continues to broaden its presence in the wine market by importing and selling a wider variety of wines, generating 83.2 billion won in wine sales last year, up by 34.4 percent from the previous year.

The company reportedly received acquisition proposals from a number of winery companies interested in selling their products.