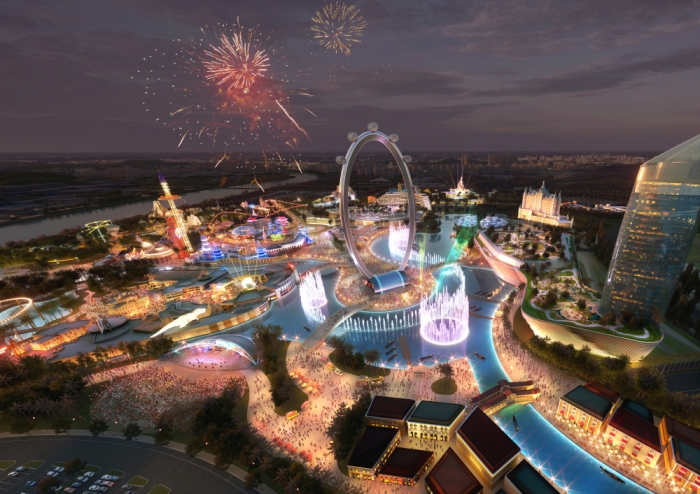 Shinsegae Property, a real estate unit of Shinsegae, has a 90 percent stake in the project and the rest is held by Shinsegae Engineering & Construction.

The contract is the result of a series of efforts that came about after the ministry authorized changes to the development plans in the area last December.

The area has been a candidate for various global theme parks for more than 10 years, including projects to build a Korean version of Disneyland or Universal Studios, neither of which were ultimately successful.

Then, last year, the government reinitiated the project, which sped up after selecting Shinsegae Property Consortium as the lead candidate last February.

“We will build a theme park not just for the domestic market, but something that can be called the landmark of Asia, something that we’ve never seen before, in order to contribute to the nation’s tourism industry and the local economy,” said Shinsegae Group Vice Chairman Chung Yong-jin last year.

Shinsegae Property plans to invest 4.5 trillion won (US$3.7 billion) to build a theme park complex on 3.16 million square meters of land in Hwaseong, about 45 kilometers southwest of Seoul.

The new global theme park will accommodate hotels, shopping malls, and golf ranges all connected through cutting-edge IT technology to attract visitors of all ages.

The theme park will partially open in 2026, with the grand opening expected to be held in 2031. Shinsegae will begin construction later next year after acquiring all necessary licenses from local authorities.

“Shinsegae Group will focus all of its resources to establish one of the world’s most renowned landmarks, based on cutting-edge IT technology and leading content,” said said Shinsegae Property CEO Lim Yeong-rok.