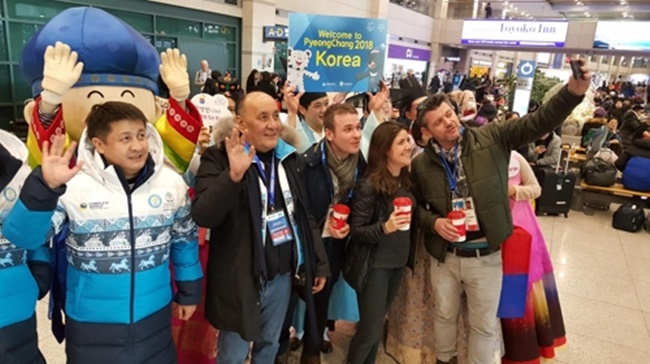 In this file photo provided by the Korea Tourism Organization and taken on Feb. 1, 2018, foreigners pose for a photo at Incheon International Airport, west of Seoul. (Image: Yonhap)

SEOUL, April 25 (Korea Bizwire) – Shopping was the most preferred activity by foreigners who came to South Korea during the PyeongChang Olympics earlier this year, excluding visiting or participating in the Winter Games, a government survey showed Wednesday.

According to the PyeongChang Winter Olympic Games International Visitors Survey, 58.3 percent of visitors who were in the country for the Olympics said their favorite activity was shopping, followed by gourmet tours with 49.2 percent and taking in the natural sights with 29.3 percent.

The survey, which allowed multiple answers, was jointly conducted by the Ministry of Culture, Sports and Tourism and the Korea Tourism Organization based on face-to-face interviews with 1,999 visitors in addition to an exit poll of 8,840 foreigners at international airports in Incheon and Gimpo.

Those who came to watch the games spent US$2,027 per person on average, higher than the $1,498 spent by those who visited South Korea with no relation to the Olympics, the survey showed.

Visitors who came to South Korea to watch the games stayed here for 6.5 days on average, while those who came on business related to the games — including athletes, journalists and organization officials — stayed for 12.3 days. Their combined average was 8.9 days, longer than the comparable figure for foreigners who traveled to the country with no relation to the Olympics, which stood at 6.9 days.

Some 280,000 inbound travelers in February, or 27.1 percent of the total, are estimated to be those who came for the games, according to the latest poll.

Japanese nationals were the largest in number in terms of visitors who came to watch the games in February, accounting for 38.7 percent of the total, followed by those from the United States and Canada with a combined 22.9 percent and Chinese with 13.7 percent. Europeans and Russians followed with 10.6 percent and 5.7 percent, respectively, it said.

Over half of all respondents said it was their first visit to South Korea, with 96.1 percent of visitors who came to watch the Olympics saying they were either very satisfied or satisfied with their trip, according to the poll.