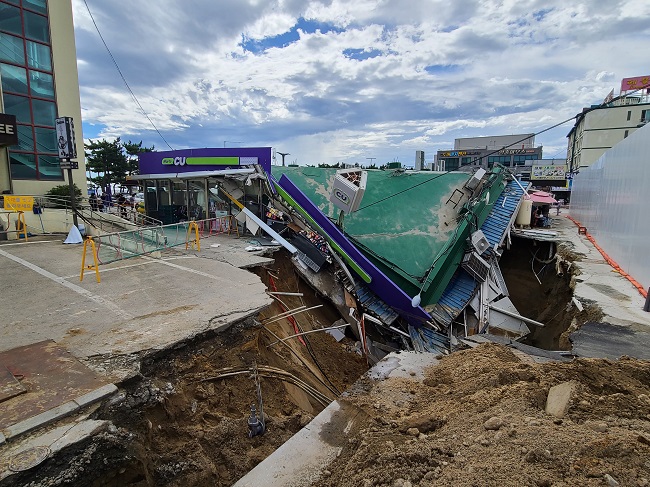 A convenience store building near Naksan Beach in the county of Yangyang, 155 kilometers east of Seoul, is in tatters after a sinkhole opened up on Aug. 3, 2022. (Yonhap)

YANGYANG, Aug. 3 (Korea Bizwire) — A large sinkhole opened up at a construction site in the east coast county of Yangyang on Wednesday, causing part of an adjacent building to collapse and forcing 97 people to evacuate, officials said.

The 12 meter-by-8 meter sinkhole, which is five meters deep, formed at 6:40 a.m. at the construction site near Naksan Beach, 155 kilometers east of Seoul, according to county officials and eyewitnesses.

Officials from the county government and the water and gas agencies launched an investigation to determine the cause of the sinkhole and were carrying out restoration work.

The construction site for a lodging facility has reported at least four sinkholes recently, a county official said, saying underground water gathering at the site due to ground excavation might be the cause.