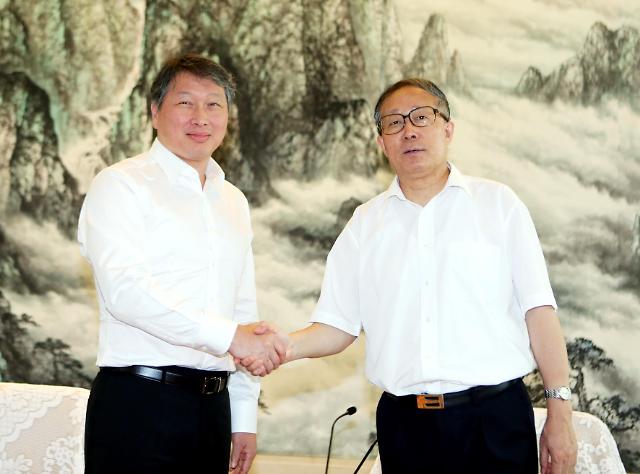 SEOUL, Aug. 30 (Korea Bizwire) – SK Group Chairman Chey Tae-won has met with Chinese joint venture partners to discuss ways to expand cooperation in the petrochemical and chip businesses, his office said Sunday, in his latest efforts to boost business after being freed from jail.

After being released on Aug. 14 upon receiving a presidential pardon, Chey toured across South Korea visiting petrochemical, semiconductor and battery factories run by affiliates before embarking on a trip to China to meet major clients, said SK, the third-largest family-controlled conglomerate here.

Days after announcing a plan to spend 46 trillion won (US$38.2 billion) on building three chip plants over the next decade, Chey on Thursday visited a semiconductor plant in Wuxi in Jiangsu Province operated by SK hynix’s local subsidiary and met with business people and senior officials, the group said.

His next destination was a naphtha cracker center in Wuhan, which was jointly built by SK Global Chemical and China’s state-run refiner Sinopec Corp. last year, it said.

SK has a 35 percent stake in the petrochemical complex in central China, which has an annual capacity of 2.5 million tons of ethylene.

Chey will visit Hong Kong on Thursday and move to Taiwan on Monday to meet local business partners in the petrochemical and chip businesses to discuss ways to expand their collaboration, his office said.

Chey had been serving a jail term since 2013 after he was convicted of embezzlement.