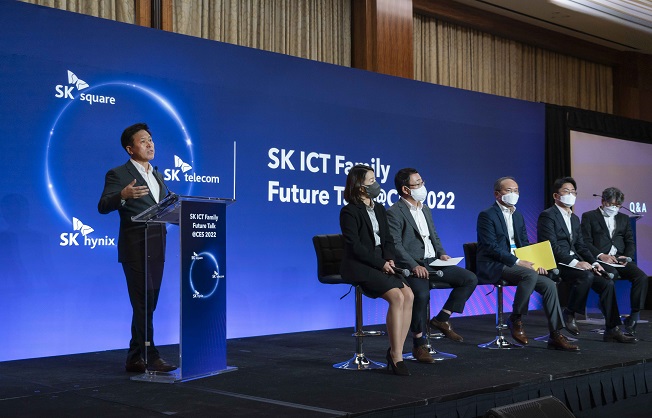 Park Jung-ho (L), vice chairman and CEO of SK hynix and SK Square, speaks during a press conference in Las Vegas on Jan.6, 2022, in this photo provided by SK Telecom Co.

LAS VEGAS, Jan. 8 (Korea Bizwire) — SK hynix Inc., a South Korean memory chip maker, has said it will invest in the joint establishment of a chip firm in the United States with two other subsidiaries of South Korean conglomerate SK Group to diversify its product portfolio and expand its global business.

“Memory chips should no longer stay as a standardized commodity and evolve into more advanced chips to meet diversified demand from customers,” SK hynix President and co-CEO Lee Seok-hee said during a press conference on Thursday in Las Vegas, where the SK Group attended the Consumer Electronics Show.

“We need close collaborations with other companies to deliver innovation,” Lee said.

The investment decision was the result of the SK ICT Alliance formed by the three companies “to jointly develop and invest in information and communication technologies and create global market opportunities,” the company said.

“The alliance comes as SK hynix celebrates the 10th year since joining the SK Group and SK Square successfully spun off from SK Telecom, marking the beginning of a new era of synergies between semiconductor, telecommunication and investment,” it explained.

The three companies also plan to create and run a 1 trillion won (US$830 million) fund this year to invest in the fields of AI, metaverse, chips and block chain, the company said, in order to “stay ahead of the convergence trend within the ICT industry and discover unicorns that can change the industrial landscape, which will lead to valuable business synergies.” 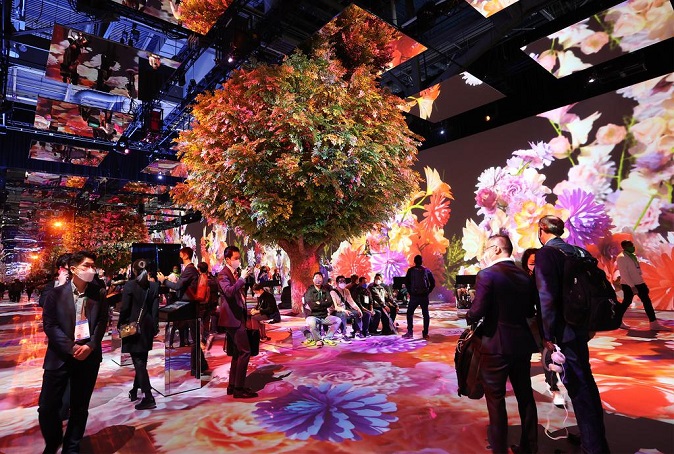 Visitors check out the SK Group booth at the Consumer Electronics Show 2022 at the Las Vegas Convention Center in Las Vegas on Jan. 5, 2022. (Yonhap)

As part of its global expansion plan, SK hynix said it was seeking to collaborate with other global players, including Qualcomm.

Amon expressed his wish to “collaborate with us in developing the market ecosystem” for next generation chips for various ICT applications, Park said.

“We also talked about a mutually beneficial collaboration on the development of AI chips,” he added.

Last month, SK hynix closed the first phase of the $9 billion deal to acquire Intel’s NAND and solid-state drive (SSD) business in South Korea’s biggest M&A deal in history. The deal is expected to be finalized in March 2025.

Lee will be appointed executive chairman of the newly established U.S. subsidiary Solidigm, which he said will help SK hynix “grow into a balanced memory solutions company” with competitiveness both in DRAM and NAND flash chips.

The acquisition is expected to rebalance SK hynix’s revenue portfolio, which is heavily dependent on DRAM. By sales, DRAM accounted for around 70 percent of the company’s total revenue last year, while NAND accounted for 23 percent.

“This is only the beginning. Based on the acquisition, we will improve the quality and profitability of our DRAM business while diversifying the portfolio of NAND solutions to achieve a more solid market position,” Lee said.

For the success of what it called the “Inside America” policy, SK hynix said it will also build a research and development center in the U.S. and seek to expand collaboration with other global ICT companies.