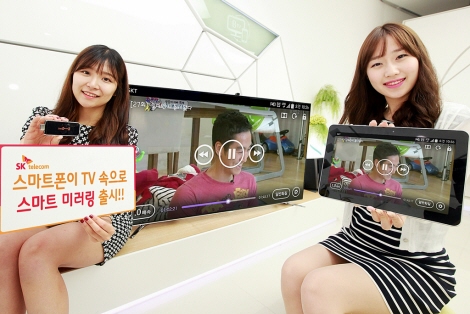 Smart Mirroring can easily be connected to an HDMI slot on high-definition displays including TVs, monitors and projectors to establish a connection to the smart devices via Wi-Fi. (image: SK Telecom)

SEOUL, May 29 (Korea Bizwire) – SK Telecom has come up with a mirroring system for smart devices called “Smart Mirroring,” which projects the screen of smartphones and tablet computers onto TVs and other larger screens, in collaboration with an ICT venture Castpro.

Smart Mirroring can easily be connected to an HDMI slot on high-definition displays including TVs, monitors and projectors to establish a connection to the smart devices via Wi-Fi. Smart Mirroring can be used not only for business purposes like presentation and virtual business meetings, but also for entertainments like movies, games and other contents.

Smart Mirroring weighs about 32 grams, and it is small enough to be carried around. Nevertheless, the device is highly functional so that it provides up to a full HD (1080 pixels) display.

SK Telecom’s Smart Mirroring also supports duel-band Wi-Fi and it is compatible with most operating systems in most versions. It is the only product in the category which can function with all operating systems including Android, Windows and iOS, and supports Wi-Fi frequency bands in 2.4 GHz and 5 GHz with excellent stability. Smart Mirroring also supports Intel’s WIDI (Wireless Display) and DLNA (Digital Living Network Alliance), which enables it to be used for various smart devices, even the older models.

Unlike its competitors which provide partial streaming services only, Smart Mirroring can be used for all the contents and apps on the smartphone. Smart Mirroring can still function in the environment without other Wi-Fi networks by using its own Wi-Fi.

An SK Telecom official said, “Smart Mirroring helps users enjoy the various contents on the bigger screen more conveniently.” The company plans to expand into the overseas markets after winning over the domestic market with Smart Mirroring.