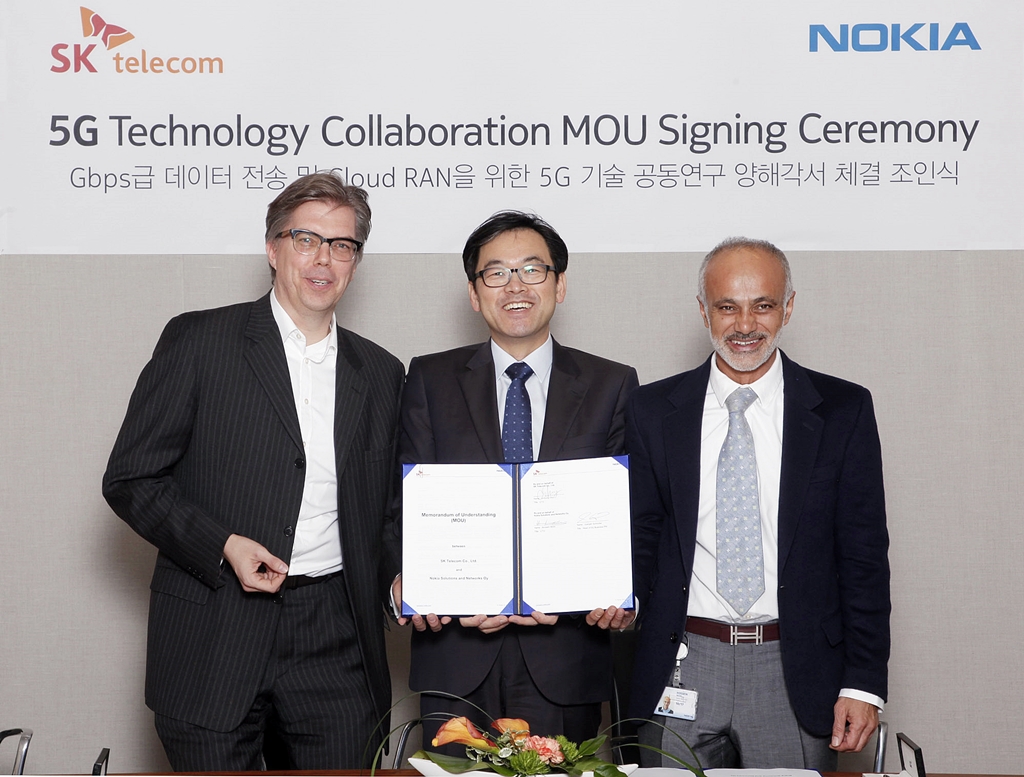 SK Telecom today announced that it signed a Memorandum of Understanding (MOU) with Nokia on January 21, 2015, to work together to lead the development and verification of the fifth-generation (5G) mobile network technologies. (image: SK Telecom)

Seoul, Korea, Jan. 22 (Korea Bizwire) – SK Telecom (NYSE:SKM) today announced that it signed a Memorandum of Understanding (MOU) with Nokia on January 21, 2015, to work together to lead the development and verification of the fifth-generation (5G) mobile network technologies.

Under the MOU, the two companies will conduct joint researches to develop core 5G network technologies such as the gigabit-level data communications technology and cloud-based virtualized base station technology.

At the signing ceremony, the two companies announced plans to make all-out efforts to demonstrate 5G in 2018 and commercialize 5G service in 2020. To this end, they plan to establish a test bed at SK Telecom’s Corporate R&D Center located in Bundang, Seoul, to verify and demonstrate 5G technologies.

In particular, SK Telecom and Nokia will develop ‘cmWave/ mmWave 5G technology*,’ which uses wideband spectrum resources in ultra-high frequency bands (6GHz or higher) for data communications. The technology is currently being discussed as one of the core 5G technologies by the 3rd Generation Partnership Project (3GPP), a mobile telecommunications standardization organization.

The MOU signing ceremony, held at Nokia’s Headquarters located in Finland, was attended by Choi Jin-sung, Executive Vice President and Head of Corporate R&D Center (CTO) of SK Telecom, and Hossein Moiin, Head of Technology and Innovation (CTO) at Nokia.

“By joining hands with Nokia, we expect to accelerate our speeds toward the development of core 5G technologies,” said Choi Jin-sung, Executive Vice President and Head of Corporate R&D Center. “Envisioning an era where all things and people are organically connected, SK Telecom will continue to bring innovative changes to the mobile network structure.”

“The future of mobile telecommunications network will not only connect people, but things as well. In the end, 5G will further extend human potential through advanced telecommunications technologies,” said Hossien Moiin, Head of Technology and Innovation at Nokia. “Together with SK Telecom, Nokia will make efforts to allow diverse futuristic services to be efficiently provided through 5G technologies.”

Meanwhile, in June 2014, SK Telecom has signed an MOU with Nokia to cooperate on the development of technologies including virtualization, software-based network establishment and next-generation cloud network management, all of which are critical in developing base stations for the 5G network. As the result, the two companies successfully developed ‘Cloud vRAN,’ the world’s first base station virtualization technology, in November 2014.