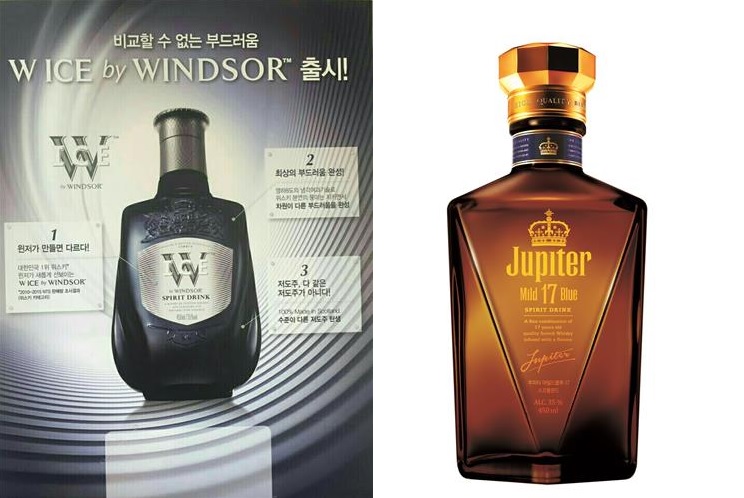 The local whiskey market maintained its negative growth since 2009 by selling 1.78 million boxes last year, 3.4 percent less than in 2013.

SEOUL, Mar. 11 (Korea Bizwire) — The Korean whiskey market, which has been trending downwards since the late 2000s, is aiming to bounce back by introducing low alcohol spirits with various scents and flavors.

According to the industry officials on March 10, Diageo Korea, Korea’s largest whiskey provider in terms of market share, will enter the low alcohol whiskey market by launching a brand new product later this month called W ICE, which has an alcohol content of 35 percent, and is infused with the scent of pine needles.

Prior to Diageo Korea’s product launch, Lotte Beverage, the distributor of Scotch Blue whiskey, released Jupiter Mild, which is based on 17-year-old scotch whiskey and has the same 35 percent alcohol content as W ICE. Jupiter Mild is a premium class product of Jupiter Mild Blue, which Lotte introduced last year.

As the sluggish market seeks to rebound after hitting the bottom with several years of stagnation, the two Korean whiskey leaders aim to lead the way by releasing new products.

The local whiskey market maintained its negative growth since 2009 by selling 1.78 million boxes last year, 3.4 percent less than in 2013. Decreased sales of leading brands like Windsor and Imperial led the struggle, but Golden Blue, which pioneered the low alcohol whiskey market, saw its sales increase by more than 57 percent.

As low alcohol liquor gains popularity in the market, lager players like Diageo Korea are jumping on the bandwagon with new low alcohol products, giving up the pride of their “scotch whiskey” brands. The Scotch Whiskey Association bans using “Scotch” in the brand names of liquor with less than 40 percent alcohol content, even if scotch is used in the blend.

The industry expects that the low alcohol spirit market will expand with the addition of products from Lotte Beverage and Diageo Korea. An industry official said, “With the addition of Lotte and Diageo, competition will intensify in the low alcohol whiskey market, but synergy effects are also expected. There are high possibilities that other beverage companies will join the market by introducing similar products.”