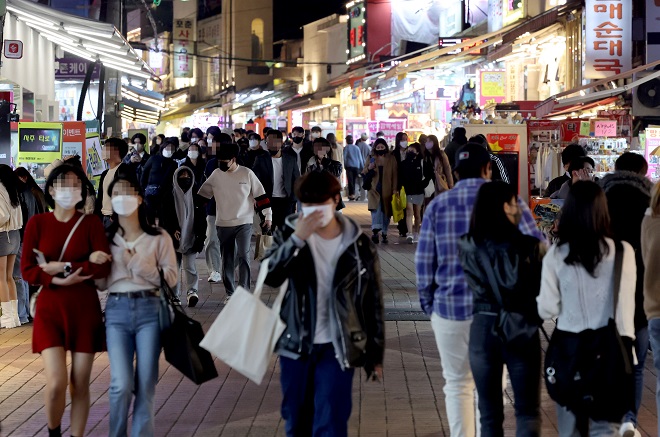 People walk down a street near Hongik University Station in Seoul on April 3, 2022, one day before the easing of social distancing rules that will allow private gatherings of up to 10 people and multiuse facilities to operate until midnight. (Yonhap)

SEOUL, April 4 (Korea Bizwire) — Restaurants, cafes and other small business owners welcomed the latest relaxation of pandemic-related business restrictions Monday while demanding the complete removal of social distancing and other virus curbs that have been in place for almost two years.

South Korea raised the ceiling for private gatherings at multiuse facilities from eight to 10 people Monday, while the business hour curfew was extended by one hour to midnight.

Hopes remain high that the latest virus restrictions could be the final ones since social distancing was first adopted in May 2020.

Authorities have stated they are considering removing all distancing rules except for requiring masks to be worn indoors if the virus curve continues to decline for the next two weeks.

“I hope that the limits on gatherings will be removed entirely,” Choi Hyo-joon, owner of a barbecue restaurant in Jongno, central Seoul, said. “We have many companies nearby, and I hope office get-togethers will resume.”

“It’s great news,” said a bar owner surnamed Chung, based in Eunpyeong, northwestern Seoul, when asked about the latest relaxation of rules.

Chung, however, also expressed reservations about whether the workplace get-together culture can be revived promptly due to the protracted pandemic.

Other owners, meanwhile, expressed frustration over what they saw as meager rule relaxations and stressed the need for the entire removal of the virus curbs.

Some also pointed out that the at-home remote work culture adopted throughout the pandemic should be eliminated in order for the small restaurant industry to truly overcome slow business and thrive.

Office workers who have worked at home, meanwhile, expressed reservations about the prospects of having to commute to work in the near future. Some have also expressed concerns of the revival of the after-work get-together culture.

“Due to the decrease in group activities at the office from COVID-19, I have enjoyed the luxury of exercising and taking various self-development courses after work,” a 26-year-old office worker surnamed Chae said. “It’s too bad (that it could come to an end).”