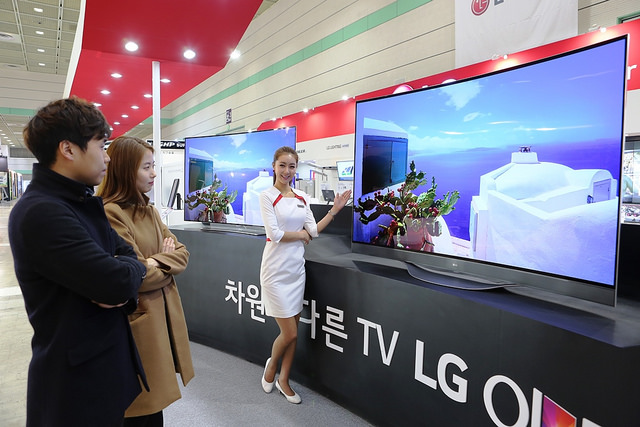 The robust growth will continue down the road, with the smart TV sales expected to reach 105 million units in 2016, marking the first time to hover above the 100-million mark. (image: LG Electronics)

SEOUL, May 13 (Korea Bizwire) – Smart TV sets are expected to take up more than 40 percent of global TV shipments in 2015, data showed Wednesday, with South Korean firms anticipated to maintain their lead in the market.

Sales of smart TVs are expected to reach 97.1 million units this year, up 11.3 percent from 86.8 million units posted in 2014, according to the data compiled by industry tracker DisplaySearch. The figure came to 73.1 million units in 2013.

On the back of the sharp rise, the global portion of smart TVs is also set to go up, reaching 41.2 percent this year, up 9.1 percentage points from 32.1 percent posted in 2013, the data showed.

The robust growth will continue down the road, with the smart TV sales expected to reach 105 million units in 2016, marking the first time to hover above the 100-million mark.

Separate data compiled by DisplaySearch earlier showed South Korea took up nearly half of the global smart TV market in 2014, with Samsung Electronics accounting for 28.2 percent and LG Electronics for 15.2 percent.

Other global rivals were far behind the two South Korean players, with Japan’s Sony garnering 7.6 percent, and China’s HiSense Electric and Skyworth Group accounting for 6.7 percent each.

Earlier this year, Samsung said it will tap deeper into the global smart TV market through an improved TV lineup that adopts quantum-dot technology that can reproduce 64 times more accurate colors than existing liquid crystal displays. All of the models are powered by its own operating system (OS): Tizen.

LG has also been promoting the Web OS 2.0 platform on its smart TVs — an updated version of the Web OS smart TV platform released last year. The company said the new system will deliver a more convenient user experience by boasting a faster speed.