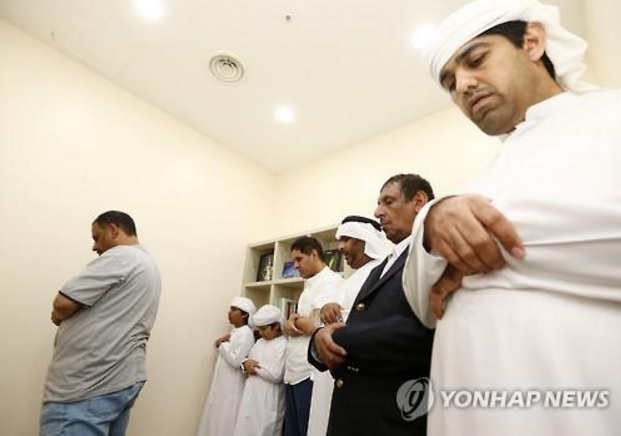 SNU Hospital arranged a new prayer room only for Muslims on the first floor of the Biomedical Research Institute building. (image: Yonhap)

She had been looking forward to the 6th of July, which marks the end of a month-long fasting period for Ramadan, the ninth month of the Muslim calendar where Muslims abstain from food and drink between sunrise and sundown to commemorate the first revelation of the Quran to Muhammad.

Muslims then hold Eid al-Fitr, meaning “festival to break the fast” for three days. Typically, they put on new clothes, attend prayers, and enjoy a feast with family.

SNU Hospital held Eid al-Fitr on Wednesday, July 6, for Muslim patients and employees like Muhammed who are living on their own away from their families.

What is more exhilarating for them is that the hospital arranged a new prayer room only for Muslims on the first floor of the Biomedical Research Institute building.

“I always had to look for an empty meeting room to pray, which I do five times a day. Now I don’t need to wander around the building anymore,” said Muhammed.

There are currently 35 Muslim inpatients at SNU Hospital. Counting family members, there are approximately 100 Muslims who regularly stay or come to the hospital.

The new prayer room was created to provide convenience for Muslims as they are starting to establish roots in Korean society. It is also intended to attract patients from wealthy Middle East nations, as Korea has become renowned worldwide for its advanced medical technology.

According to the Korea International Trade Association, the number of medical tourists from the UAE who visited Korea between 2010 and 2015 increased by 174 percent annually. The average medical expense they spent per person was 15.4 million won ($13,300), which was the highest among patients from 191 different countries.

“What Muslim patients consider most important when they choose a hospital is whether the facility has a prayer room and provides halal food,” said an official from SNU Hospital.

About 50 Muslim patients, families, and other hospital personnel partook in the festival that day.