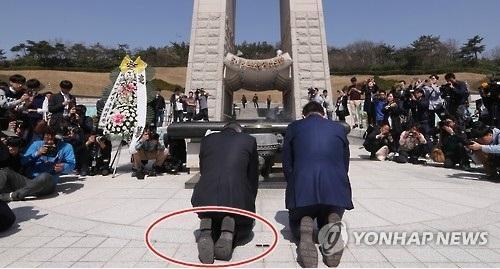 President Moon Jae-in (L) wearing shoes with worn-out soles as he knelt in prayer at a cemetery for the victims of a 1980 civic uprising in the southwestern city of Gwangju, May 18, 2017. (Yonhap)

The social enterprise, Scene of Making Shoes, said its chief, Yu Seok-yeong, visited the presidential office Cheong Wa Dae for the delivery of the AGIO handmade shoes to the presidential couple.

The AGIO shoes made headlines in 2017, when Moon was pictured wear a pair with worn-out soles as he knelt in prayer at a cemetery for the victims of a 1980 civic uprising in the southwestern city of Gwangju.

The delivery came after Moon placed an order online with the company on Friday and Kim had her feet measured at an AGIO shop near the presidential office on Feb. 11.

“We hope President Moon will make a visit to North Korea and take part in activities to raise the status of our country while wearing the shoes,” Yu told Yonhap News by phone.

The company had folded due to financial difficulties in September 2013 after it was established in Paju, north of Seoul, in March 2010.

After Moon came into office in May 2017, he hoped to buy another pair of the shoes but was disappointed at the news of the company’s bankruptcy, officials at the presidential office said.

The shoe manufacturer managed to relaunch by opening a new plant in Seongnam, just south of Seoul, in December 2017, with the help of its supporters, including former Welfare Minister Rhyu Si-min, singer Kang Won-rae and other public figures.

Among 17 people working at the company are 11 who have disabilities, including Yu, who has a visual disability.