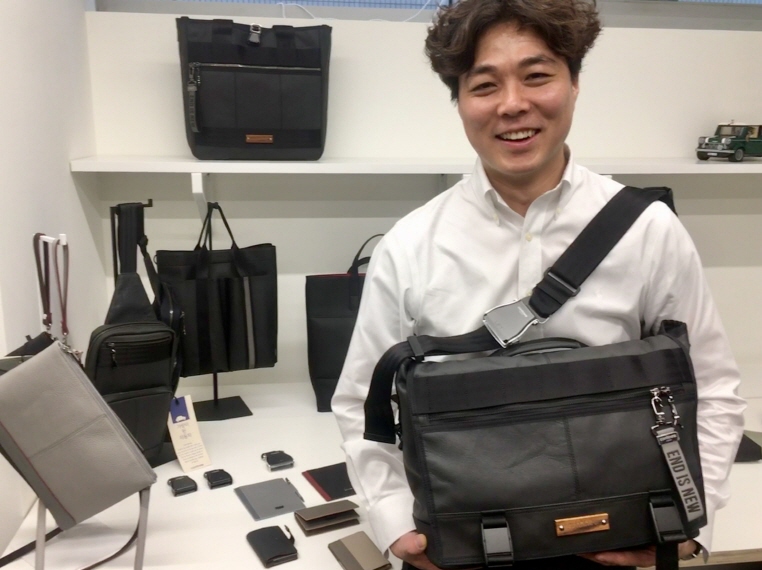 Choi Ian, head of South Korean bag maker Morethan, poses for a photo at his office in Seoul with one of the company’s Continew bags made with car seat leather and a seat belt. (image: Yonhap)

SEOUL, May 3 (Korea Bizwire) — When studying in Britain in 2010, Choi Ian was shocked one morning to find his old yet beloved Rover Mini parked on the street and crushed so heavily in both the front and rear that repairs made no sense.

The insurance firm offered money in exchange for scrapping the 1994 model that was smashed into from behind by a drunk driver. Choi agreed but wanted to save some part of the classic car, which he loved so much that he removed its leather back seat and used it as a sofa.

That was the first recycling Choi did of leather car seats, something that later became his job as he set up a social enterprise startup upcycling car seat leather, airbags and seat belts into backpacks, messenger bags, tote bags, cross bags and wallets.

“My graduate school thesis was about corporate social responsibility, and while working on the paper, I looked into how Korean carmakers are fulfilling their social responsibilities,” the 37-year-old Choi said of his time at the University of Leeds.

“I thought that automakers should care not only about reducing exhaust gas emissions but also about what to do with waste from scrapped cars. It was at the time that the car seat of my Mini came to my mind,” he told Yonhap News Agency. “Leather is the only car part that hasn’t been recycled.”

After returning home, Choi decided to start a business doing just that.

With the help of a bag designer who had quit a well-known firm to raise kids, Choi first made bags out of leather taken from Hyundai Dynasty and Sonata sedans scrapped at a junkyard in 2014. He later established the social enterprise named Morethan in 2015.

For about a year since then, Choi visited a number of car junkyards across the country to procure leather for his products, often cutting his hands while taking leather off seats with a knife. He also experienced various accidents, such as a forklift driver raising the car Choi was working in, thinking nobody was in there.

“Car seat leather is very durable as it is well-coated,” Choi said. “In particular, the parts which we put our backs on look fresh even after 10 years of using. The only treatment we do after taking leather off from cars is washing to get the smell away.”

These days, Choi receives about 5 tons of leftover pieces of leather from a car seat factory. It’s a win-win deal because Choi’s firm procures leather for free while the car seat company saves about 10 million won (US$9,321) a month in disposal costs, he said.

Choi said he tries to make sure the quality of his products is as good as the pro-environment message they’re carrying. That’s why he outsources leather sewing to top-class technicians with decades of experience in designer bag making, even though it is 1.7 times as expensive as ordinary sewing, he said.

“Before starting my business, I did a lot of research on how upcycling companies have fared and found that many of them went bankrupt,” he said. “The main reason was because of the poor quality of their products. Quality wasn’t good, and customers didn’t want to spend money on them no matter how good the messages were that they’re carrying.”

Choi’s products, sold under the brand name Continew, are well-designed and made such that even some celebrities have purchased them on their own, such as Rap Monster, the leader of K-pop boy band BTS and the comedian Kang Ho-dong, sparking public interest in the little-heard-of brand. 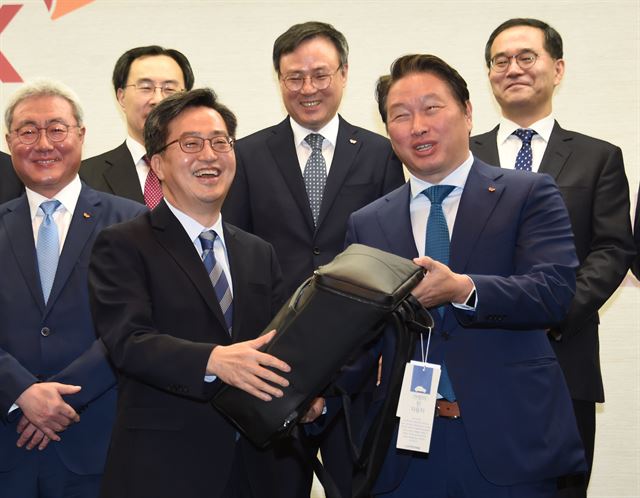 SK Chairman Chey Tae-won (R) hands over a Continew bag to Finance Minister Kim Dong-yeon (L) after a meeting at the conglomerate’s headquarters in Seoul on March 14, 2018. (image: Min. of Strategy & Finance)

In March, Chey Tae-won, chairman of the conglomerate SK Group, also publicly offered a Continew bag as a gift to Deputy Prime Minister and Finance Minister Kim Dong-yeon. Kim received the bag and paid for it as government officials aren’t allowed to receive a gift worth more than about 50 dollars under an anti-graft law.

Chey’s offering of the bag was aimed at taking advantage of the media spotlight to boost sales of Choi’s firm as it is one of the social enterprises that SK Innovation, a subsidiary of the country’s third-largest conglomerate, has been providing financial and other support to.

The episode was widely reported in the media, reinforcing the image of Continew bags associated with intellectuals interested in environmental protection and recycling. Sales have since skyrocketed to more than 1,000 bags a month from just a few dozen.

“After providing financial help to us for two years, SK determined it’s time to help us strategically, rather than simply providing funds,” Choi said. “I heard that Chairman Chey, who has always been very much interested in social enterprises, was briefed that we’re doing a good job and that he was very much satisfied.”

Morethan currently has only one store in Goyang, north of Seoul, but plans to open three more in the coming months, one of them at the duty free shop on the southern resort island of Jeju and two others near Los Angeles, Choi said.

The company also sealed some contracts to export to Germany, Britain and Spain when it took part in an ethical fashion exhibition in Berlin in January.

Choi said he hopes to further advance the company’s goal of recycling resources as much as possible and produce as little waste as possible. Choi aims to build a new factory that collects rainwater to wash leather and reuse the water again after purification.

In an effort to recycle leather left over after making bags, the firm grinds it into tiny pieces and mixes them with latex rubber to make leather boards that are used in cheaper and simpler product lines, Choi said.

As a social enterprise eligible for tax cuts and other state benefits, Choi’s firm also provides North Korean defectors with opportunities to work part-time as sales staff at the company’s store in the Starfield shopping mall in Goyang.

“I believe everything has its own value and we, Morethan, transform abandoned resources into useful ones,” Choi said. “I would like to see Morethan keep growing so that we can see our products wherever we go. We want to be a global company making positive effects on society.”