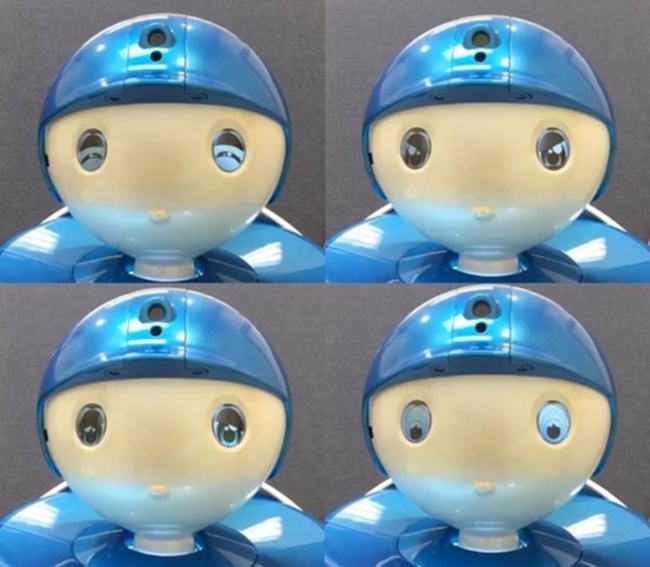 According to the findings, the number of patients who met the robots’ eyes increased from 20 percent to 78 percent after treatment, while the figure for the therapists increased from 17 percent to 74 percent, a similar result. (Image: Seoul National University Hospital)

SEOUL, Jul. 4 (Korea Bizwire) — Social robots that are capable of showing a variety of facial expressions have been proven effective in treating autism spectrum disorder (ASD), according to a new medical study.

The research team led by neuropsychiatry professor Yu Hee-jung at Seoul National University Hospital discovered there was little to no difference between the effectiveness of social robots and medical professionals when it comes to treatment of ASD, after conducting an experiment with 15 children between four and seven years of age who suffer from the disorder.

Researchers separated the children into two groups after equipping them with sensors and cameras, with one group being treated by social robots and the other by professional therapists.

During the experiment, robots were made to show certain facial expressions to convey happiness or sadness, to see and record the reaction from the children surveyed. When the children were able to guess the correct emotion, the robots rewarded them by singing and dancing.

The treatment with social robots saw ASD patients improve their emotion recognition accuracy from 16 percent to 83 percent, while therapists saw the figure jump from 14 percent to 90 percent.

“Patients who suffer from ASD have a hard time reading expressions and emotions, and can’t meet the eyes of other people easily, which hinders their social life,” Professor Yu said.

“With the lack of medical infrastructure and staff for ASD patients, we hope the social robots will fill a void and play an assistant role to help medical professionals,” Yu added.

Yujin Robot’s ‘iRobiQ’ and the Korea Institute of Science and Technology’s CARGO, robots that can show emotions through the movement of their eyes, were used in the study.