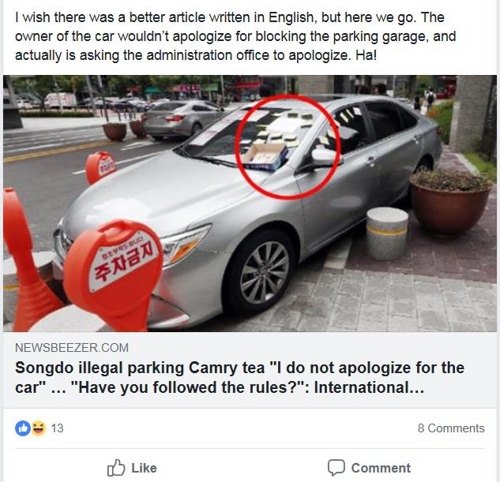 SEOUL, Aug. 31 (Korea Bizwire) – With a woman who blocked the entrance to an apartment parking lot in retaliation for receiving a parking sticker drawing a nationwide attention, foreigners living in Songdo, where the drama unfolded, have been relaying information on the whereabouts of the event.

The whole thing started on Monday afternoon when a worker at an apartment complex in Songdo, Incheon, placed a parking sticker on a Camry in the underground parking without a parking decal.

The owner of the car, a woman in her 50s, became furious and complained. In protest, she parked her car across the entrance to the parking lot and left the scene.

Residents of the complex, who waited for six hours for the Camry owner to show up, sprinkled oil on the car’s tires and pushed the car aside.

Outraged by the inconvenience, they blocked the Camry with safety blocks and other vehicles so that the car couldn’t leave without an apology.

The woman, however, demanded that management of the apartment complex apologize and remove the sticker. The residents then placed post-it notes on Camry to deliver messages to the owner.

As the whole story has been televised nationwide since Monday, the woman has been on the receiving end of harsh criticism from the public.

She delivered her sincere apologies to residents in writing on Aug. 30, and said that she was moving out of the complex.

Foreigners in Songdo were greatly entertained by this tumult, posting stories and pictures on social media.

Photos of the post-its on Camry, the story of the owner’s attempt to sell the car second-hand, and its failure due to the lock placed by a resident – all went viral on the internet, live.

“I have seen the story since the day one and it’s ridiculous,” said a foreign resident of Songdo. “It’s almost like watching a reality TV show.”

About 3,000 out of 130,000 residents in Songdo are non-Koreans, working for international businesses, organizations and schools.