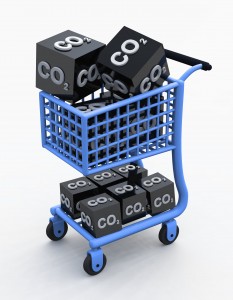 SEOUL, Jan. 5 (Korea Bizwire) – South Korea will open a carbon trading system next week after years of delay, but the road ahead remains bumpy due to resistance from the business community and weak confidence in the nascent program.

The Korea Exchange (KRX), the nation’s main bourse operator, will begin the cap-and-trade system on Jan. 12 with 525 local companies to join global efforts to curb greenhouse gas emissions to 30 percent below business-as-usual (BAU) levels over the next five years.

The government last month gave the companies an emission quota of 15.98 billion Korean Allowance Unit (KAU), with one KAU equivalent to a ton of carbon dioxide gas.

The carbon derivative market will operate for two hours from 10 a.m. in the early stages and extend business hours depending on the trading volume, the KRX said. During the starting stage from 2015 to 2017, companies under the emission target will receive carbon allowances for free.

Although the system goes into effect more than three years after the enactment of a carbon emissions law, the corporate community is still pressing for a delay of its implementation and a raise in the emissions quota to at least 20.21 billion KAU.

The nation’s four petrochemical companies jointly submitted an appeal with the environment ministry to increase the quota assigned to the industry, while steelmakers asked the government to delay the trading system for at least six months, citing insufficient preparations.

The Federation of Korean Industries (FKI), a major business lobby group, estimated the current plan will impose a financial burden of up to 27.5 trillion won (US$ 26.7 billion) on domestic companies in the first three years.

The environment ministry argues that the potential financial losses do not take into consideration companies’ efforts to reduce greenhouse gas emissions as well as the long-term benefit of eco-friendly manufacturing processes for companies and the national economy.

“The reduction target was confirmed based on consultations with individual firms and civilian experts. Those who complain about insufficient carbon credits haven’t taken into account efforts to reduce carbon emissions and have failed to provide relevant documents to the government,” Lee Hyung-sup, a senior official at the environment ministry, said, “If needed, the government will provide additional carbon credits later depending on the situation.”

Lee also rejected claims of a lack of carbon credits for emergency purposes, saying it is premature to judge the appropriate level of reserves at this point. The government designated 14 million tons worth of carbon credits, which falls far short of 423 million tons requested by the industry.
“The emergency reserve is designed to settle the market when there’s a sharp fluctuation in prices. The government will take comprehensive measures when there is urgent need to stabilize the market,” Lee said.As a bourse operator, the KRX said the point is to provide a market mechanism for the government’s efforts that is more flexible than such measures as a carbon tax and regulations adopted by other nations.

“The carbon trading system is designed to provide a market mechanism to allow companies to trade emission rights. The KRX is not entitled to play a leading role in boosting trading between companies,” said Yoon Suk-youn, who is in charge of the KRX’s derivatives market division.

Market watchers expect actual trading activities to take place after the government completes its measurement of greenhouse gas emissions by individual firms in March 2016. The first compliance deadline is set for June 2016.

“Companies subject to the reduction target are expected to take a wait-and-see approach in the early stage as they can allocate allowances under the flexible accounting system. Companies may be reluctant to sell leftover emissions because it might look like they were given a relatively easy target,” Yoon said. “We don’t expect the cap-and-trade system to be vigorous from the beginning because it takes time for a new system to take root. We will implement various measures under mid- and long-term plans to facilitate trading depending on the market situation.”

In case of the European Carbon Exchange, the pan-European trading platform launched in 2005, the trading volume in the first three months accounted for just 1 percent of recent trading activities, according to the KRX.Shanghai’s carbon credit market, which opened in November 2013, had about 70 percent of trading taking place in June 2014, just before the compliance deadline.