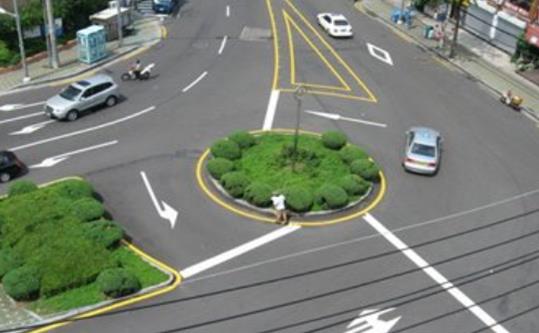 Rotaries give priority to entering traffic, and stop lines are sometimes drawn inside the junction. (image: Min. of the Interior & Safety)

SEOUL, Oct. 24 (Korea Bizwire) — The Ministry of the Interior and Safety announced on Tuesday that rotaries, otherwise known as traffic circles, will be replaced with roundabouts.

Rotaries and roundabouts are circular intersections that differ on how cars pass through them. Rotaries give priority to entering traffic, and stop lines are sometimes drawn inside the junction.

Roundabouts, in contrast, give priority to traffic already in the intersection, and instead of stop lines, they have yield lines drawn along the entry point of the junction.

Many drivers are ignorant of the differences between rotaries and roundabouts.

In a study conducted by the Korea Transport Institute (KTI) in 2016, 43.4 percent of 1,220 respondents said they were not aware of the differences between these two kinds of circular junctions. 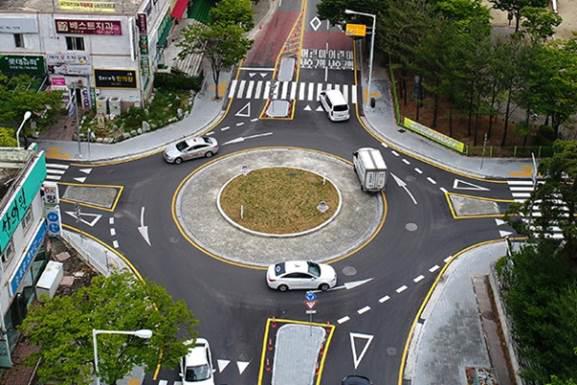 Roundabouts, in contrast, give priority to traffic already in the intersection, and instead of stop lines, they have yield lines drawn along the entry point of the junction. (image: Min. of the Interior & Safety)

The ministry has taken this into consideration and plans to replace all rotaries with roundabouts to minimize confusion among drivers, with the ultimate goal of preventing car accidents.

There are currently 26 rotaries out of 1,110 circular intersections in South Korea.

The ministry has also been replacing normal junctions without traffic lights or intersections that require less traffic control with roundabouts since 2010.

According to a study conducted by the KTI, 88 roundabouts installed in 2015 helped decrease the number of deaths and injuries by 56.8 percent, and reduce the number of car accidents by 50.5 percent.

The ministry has built 484 roundabouts throughout the country so far, with 14 roundabouts to be added this year and an additional 50 in 2019.

Government officials also plan to work with navigation service providers to include the location of roundabouts and their usage in navigation devices.

One thought on “South Korean Rotaries to be Replaced with Roundabouts”