As a result, the piles of snow in the main stadium were removed, and the opening ceremony went off without a hitch. (Image: ROK Army)

PYEONGCHANG, March 19 (Korea Bizwire) — The Olympic festival for the physically challenged that was the PyeongChang 2018 Paralympics had its closing ceremony on March 18.

The background from which the Paralympics came into being is closely tied to the military during World War II. Initially intended as a means of rehabilitation for soldiers with lower body disability and other impairments, in 1948 the British spinal injuries center launched the Stoke Mandeville Games in London, the event that began the Paralympic tradition.

This winter’s exhibition shared literal common ground with the military, as the South Korean government deployed a total of 85,413 personnel in man-days for the Paralympics.

When concerns were raised as to whether the Paralympics opening ceremony could be held as planned because of the 110cm-plus heavy snowfall in the Daegwallyeong area after the conclusion of the Winter Olympics, the military deployed around 1,500 service members who began snow removal operations with the thoroughness of a military field exercise. As a result, the piles of snow in the main stadium were removed, and the opening ceremony went off without a hitch.

Regarding the pre-opening ceremony preparations, president Moon Jae-in expressed gratitude via his personal Facebook account by writing, “I was told that the whole area of Pyeongchang was blanketed by snow until this morning (March 9), which made me very worried. But after I got here, the snow in the stadium and on the roads had been neatly removed. This is all thanks to the organizing committee members, the volunteers and the troops that took part in the snow removal. Thank you very much.” 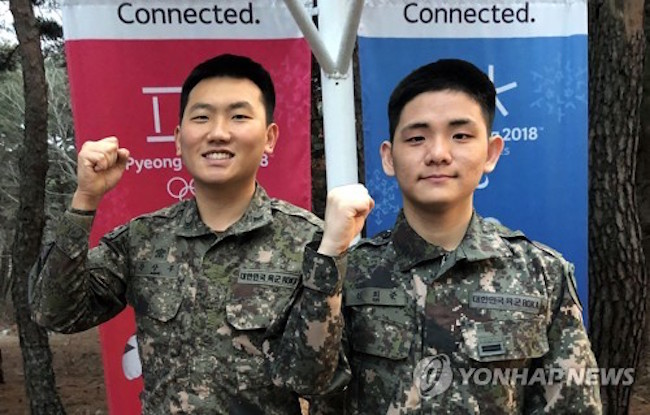 In addition, Moon’s message said, “I also send special regards to the members of the military who are providing security, undertaking snow removal duties, handling operations support and performing other duties in various locations on the PyeongChang Paralympics grounds, and who are going about their jobs in a reliable and dependable manner.”

To ensure the safety of the Paralympics, the military deployed 2,646 elite special agents from rapid response teams, explosive disposal units and the counterterrorist and hazardous materials special mission brigade. These individuals were on 24-hour standby in or near the Paralympic facilities and were fully equipped to respond to any potential hostile threat.

This Winter Paralympics is being called “the largest and most successfully run in the sporting event’s history”. The presidential Blue House issued a press release summing up the event’s success, through which it stated, “567 athletes from 49 countries participated in the Paralympics, the most in the event’s history. In addition, the IOC president and 29 VIPs holding the rank of minister or higher from 20 nations visited South Korea.”

The press release revealed that 2,213 media members from 51 countries – including South Korea – and 814 press personnel from 29 countries made the trip to Pyeongchang. Financially, the Paralympics exceeded ticket sales targets by 149 percent and brought in more than 6.66 billion won in revenue from ticket sales.