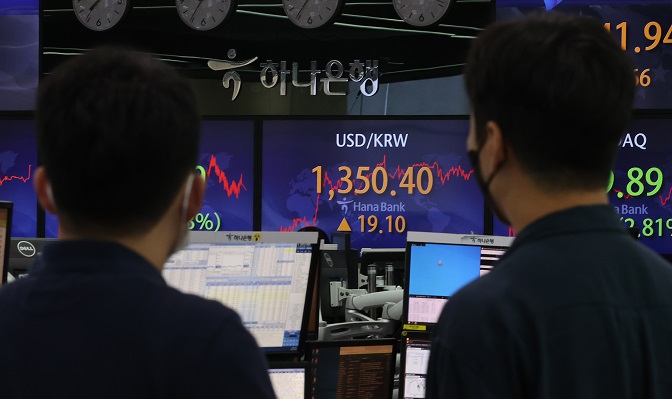 An electronic signboard in the dealing room of Hana Bank in Seoul on Aug. 29, 2022, shows the U.S. dollar having gained 19.10 won to close at 1,350.40 won. The South Korean currency sank below the 1,350 level against the U.S. dollar for the first time in more than 13 years as the Federal Reserve’s hawkish monetary policy stance boosted demand for the greenback. (Yonhap)

SEOUL, Aug. 31 (Korea Bizwire) — Exchange students in the U.S. and their parents are facing growing concerns as the won-dollar exchange rate continues to climb.

“My parents used to send me 1.5 million won (US$1,120) every month as a living stipend last year. Now, with the higher exchange rate, they’re sending me another 300,000 won, but it’s never enough,” said a 27-year-old student surnamed Kim who enrolled at a graduate school in the U.S.

“Exchange students are choosing not to go on summer vacation to save up on what they have,” said a 31-year-old resident of Atlanta surnamed Ryu.

“There are friends who are trying their best to manage with what they’ve saved up so far, without relying on remittances from their parents.”

Exchange student communities are increasingly sharing their concerns about the exchange rate and rising financial burden. The concerns are shared not only by those already in the U.S. but those who are preparing to go there.

Other students on exchange in Europe are also sharing similar concerns.

“My parents have been sending me the same amount of money every month. Whenever I exchange it for pounds, the amount just gets smaller and smaller,” said Lee Joo-ho, a 25-year-old student enrolled at a college in Britain.