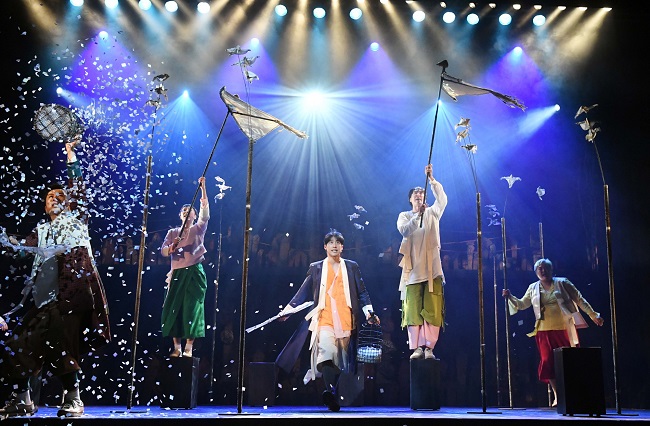 This undated photo provided by Jeongdong Theater shows a scene from its original musical “Pan.”

Musical “Pan” has been gaining more-than-expected popularity since it premiered in July at Jeongdong Theater, a state-run venue that stages traditional performing arts.

Set in the late 19th century of the Joseon Dynasty (1392-1910), the show tells the story of Dalsu, a nobleman who wants to become the best storyteller in the country.

It appeals to a young audience for its blend of Korean traditional percussion, folk songs and pansori, a Korean genre of musical storytelling, with modern Western genres of swing, tango and Bossa nova.

It features a mysterious event surrounding a forbidden music score from the ancient kingdom of Silla at Jangakwon, the institution in charge of court music and dance during the Joseon Dynasty.

The gukak orchestra performs a harmonious mix of traditional Korean elements with western style sounds in collaboration with the Gyeonggi Philharmonic Orchestra. 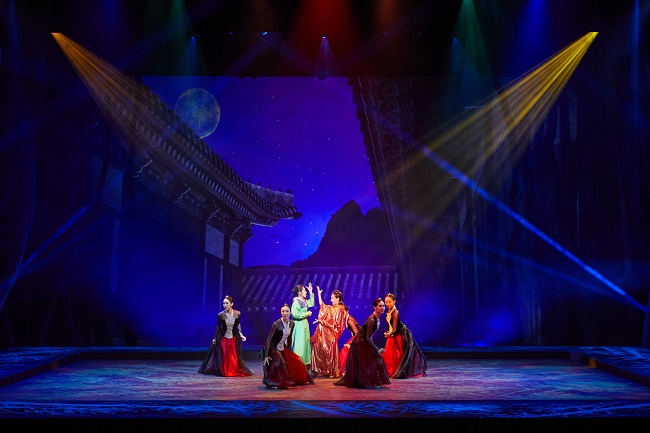 This photo provided by the Gyeonggi Sinawi Orchestra shows a scene from its musical “Geumak.”

The show has won a number of awards for its fresh reinterpretation of Korean rhythms and contemporary tunes since its first run in 2019.

The upcoming musical play “For Forgotten Heroes” at the Sejong Center for the Performing Arts is another Korean percussion-Western jazz crossover piece.

“The musical is a melting pot of different music styles ranging from traditional to electronic,” Won Il, the art director and composer of “Geumak,” said.

“Recent shows will catch the ears of the Korean audience, who are familiar with Western shows, like Broadway licensed musicals.”