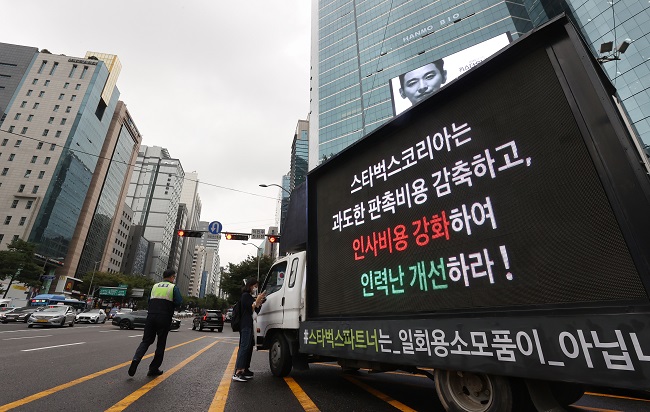 A truck hired by Starbucks Coffee Korea employees stands on a road in southern Seoul on Oct. 7, 2021, carrying a sign calling for the improvement of their working conditions. (Yonhap)

The local unit of the U.S. coffee giant announced that it will recruit 1,600 new employees nationwide starting on Friday in addition to regional recruiting that is currently under way.

It also plans to offer higher wages to baristas with better performance and more experience, as well as to store managers.

The company will set up a separate task force to prevent an excessive workload from being imposed on employees whenever the company introduces new seasonal and non-seasonal merchandise.

The company will also renovate staff lounges at all Starbucks stores by the end of the year, and organize a separate human resources team and a Facility and Equipment team dealing with new employees and work environment, respectively, to focus improving conditions for employees.