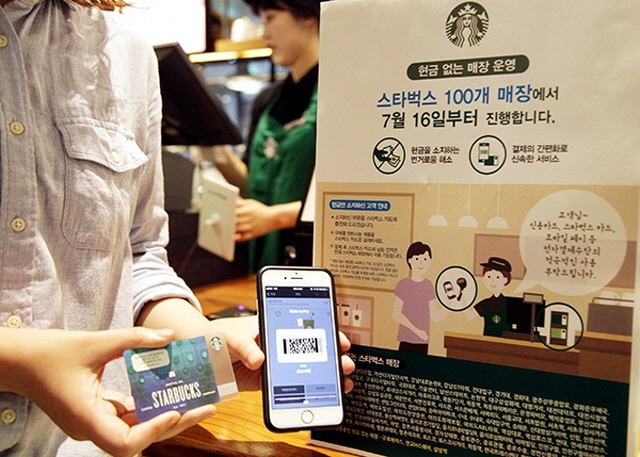 SEOUL, Jul. 2 (Korea Bizwire) — Starbucks Coffee Korea Co. said Monday it will increase the number of cashless stores to over 100 across South Korea this month amid rising use of credit cards and mobile payment systems in the tech-savvy country.

Earlier in April, the coffee giant began a test run of three cashless stores in major office districts in and around Seoul.

The proportion of cash transactions at these stores has since dropped from 3 percent to 0.2 percent, according to the joint venture between Starbucks Coffee International Inc. and South Korean retail giant Shinsegae.

The company will turn 100 more outlets into cashless stores from July 16 in addition to the three under the trial system.

Starbucks said the decision is part of its broader digital innovation drive as cash payment has been constantly declining at stores in South Korea, from 31 percent of the total in 2010 to 15 percent in 2013 and 7 percent last year.

The total daily average amount of electronic financial transactions came to a record 581.53 billion won (US$521.6 million) in the first quarter of this year, up 13.2 percent from a quarter earlier, according to government data.

One thought on “Starbucks to Increase Number of Cashless Stores in S. Korea”