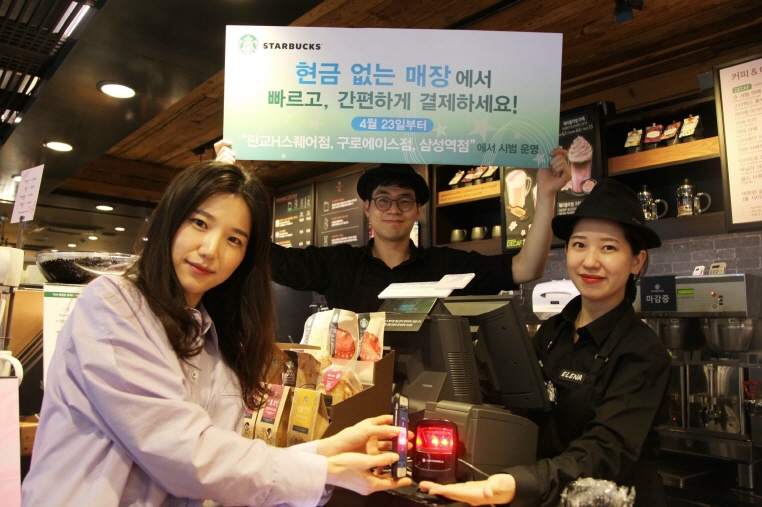 Models pose for a photo to advertise the test operation of cashless stores in South Korea set to kick off April 23, 2018. (image: Starbucks Coffee Korea)

SEOUL, Mar. 22 (Korea Bizwire) — Starbucks Coffee Korea Co., the local unit of the U.S. coffee giant, said Thursday it will begin a test run of cashless stores at three outlets next month amid rising use of credit card and mobile payment systems.

The stores at the country’s major office districts — Gangnam and Guro in Seoul, and Pangyo, just south of the capital — have been tapped to start testing the new system April 23, according to the company.

When launched, it will mark the second trial for the global coffee giant, following its first cashless store under test run in Seattle, the United States, it said.

“As our customers’ mobile payments and use of credit cards continue to increase, we want to provide a more innovative and seamless payment experience through this trial,” said Lee Seock-koo, the head of the Korean unit.

Starbucks Coffee Korea plans to analyze the impact of the cashless system and reflect the findings in its operations.

The U.S. coffee giant, which opened its first Korean branch near Ewha Womans University in Seoul in 1999, had 1,140 stores throughout the country as of last year.