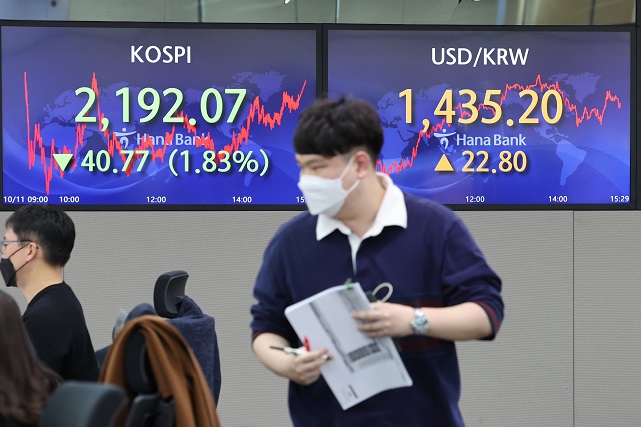 An electronic signboard in the dealing room of Hana Bank in Seoul on Oct. 11, 2022, shows the benchmark Korea Composite Stock Price Index (KOSPI) having dropped 40.77 points, or 1.83 percent, to close at 2,192.07. South Korean stocks fell sharply as investors sold off tech, auto and other stocks amid concerns that monetary tightening and geopolitical risks could tip the global economy into a recession. (Yonhap)

The combined amount of stock transaction tax collected in August came to 528.5 billion won (US$368 million), down from 1.01 trillion won tallied a year earlier, according to Rep. Jin Sun-mee of the main opposition Democratic Party, citing data from the National Tax Service.

Over the January-August period, the amount came to 4.6 trillion won, down 35 percent from the previous year, it added.

The decline came as retail investors walked away from the stock market as the war between Ukraine and Russia and rate hikes dealt a harsh blow to the securities market.

The combined trading volume in the South Korean stock market came to 627.5 trillion won in August, plunging from 1,153 trillion won tallied in the previous year.

Those from retail investors dipped to 420.5 trillion won from 834 trillion won over the cited period, the data added.