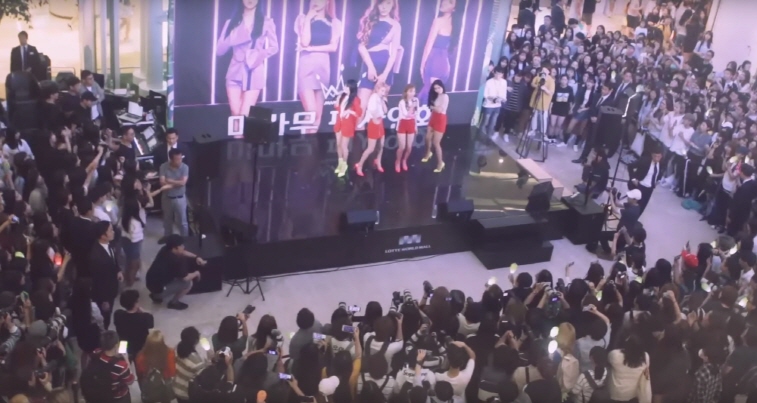 SEOUL, Aug. 15 (Korea Bizwire) — When it comes to busking, or the act of the no-frills street performance, the common notion is that the domain is reserved for, or occupied by, underground or experimental art. But in today’s K-pop, that notion is slowly being upended, with more mainstream artists hitting the streets as a fairly routine marketing strategy.

Funk R&B quartet Mamamoo, one of this year’s biggest idol groups, threw an unannounced mini concert at Lotte World Mall in southern Seoul on June 25. The ladies belted out past fan favorites like “Decalcomanie” and “Um Oh Ah Yeh,” and their most recent hit “As For Me,” released just few days ahead of the concert.

The blitzkrieg gig was thrown as a celebration for “As For Me” reaching No. 1 on major streaming charts just hours after being released on June 22.’

Along with performing its hit dance tracks “Mister Potter” and “YOLO,” the ladies, more in the vein of true busking, also threw an unplugged concert-like segment, with the band singing while playing live instruments themselves. The event was broadcast live via Naver’s video platform V Live.

Rookie boy band Varsity, comprised of Koreans, Chinese and one Chinese American, threw an impromptu busking show in Seoul’s college area of Shinchon in late April. A video uploaded on YouTube shows many pedestrians stopping by to capture the performance on their smartphones.

Using a set of plain acoustic guitars, an electronic keyboard and percussive shakers, Cube Entertainment’s girl group CLC back in February of 2015 performed a mini concert at a playground near Hongik University in western Seoul.

A video of the band’s gig, during its pre-debut days, shows the members dressed in plain sweaters and long coats. It would have been difficult for anyone without prior knowledge to realize that the ladies were a debut-in-waiting idol group. The concert was part of a charity project aimed to help children with developmental disorders. 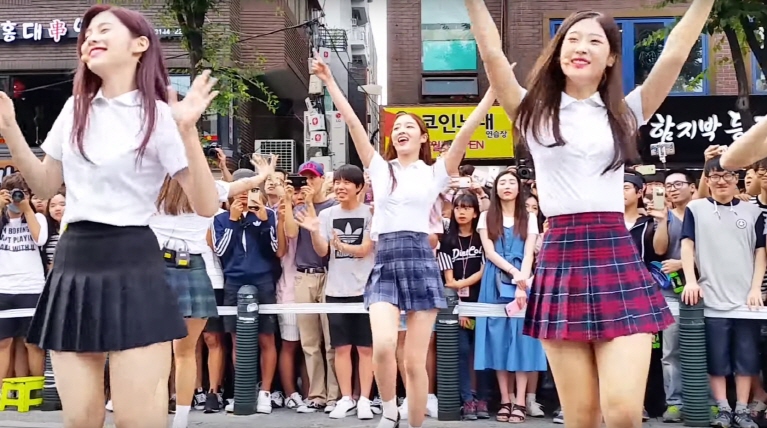 This past May, girl group Momoland had planned to throw a busking gig also around Hongik University but had to call it off, as it coincided with then-Presidential Candidate Moon Jae-in’s free hug event.

“We concluded that a simultaneous proceeding would be difficult due to the presidential candidate’s vow to keep his (free hug event) promise,” Momoland’s agency Doublekick Company then said.

K-pop’s pioneer busking idols are probably the members of Crayon Pop. Long before their helmet-donning music video “Bar Bar Bar” broke big in 2013, the team had shored up a cult following on social media for its guerrilla-style street shows in major cities and even in Japan.

Experts attribute this trend to the growing competition and market saturation within the idol scene. With similarly new boy and girl bands churned out regularly, companies have made their stars stick out and be recognized somehow.

Talent agencies can also gauge the level of reception a certain artist creates though either an official debut or promotion of new albums. Although busking lacks the glitzy production of either TV shows or concerts, direct human-to-human interaction between performer and audience is difficult to extrapolate to television or music videos.

Some experts say idol artists can also modify their public image in a more authentic and genuine light.

“Through live street shows, the artists can break the mold of their commercialized images and reveal their genuine selves,” Im Jin-mo, a Seoul-based music critic, said.

Im added, “Take for example Girls’ Generation. Nowadays it’s impossible to run into Girls’ Generation on the street. But in the case of Mamamoo’s street show, the group is effectively signaling the idea that they are a friendly and accessible team.”