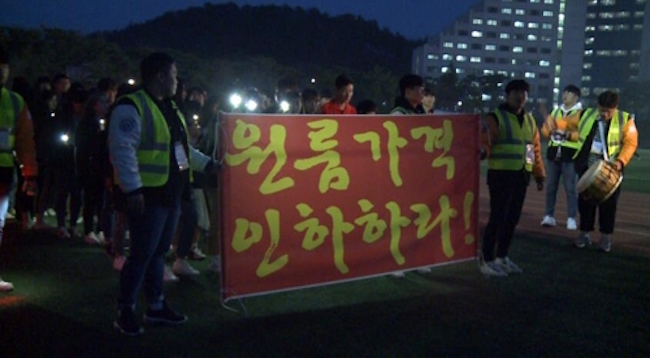 Students at Semyung University in Jecheon are raising their voices in protest at what they perceive to be exorbitantly priced housing options near the university. (Image: Yonhap)

JECHEON, April 11 (Korea Bizwire) — Students at Semyung University in Jecheon are raising their voices in protest at what they perceive to be exorbitantly priced housing options near the university.

Already burdened with costly tuition fees, the continually climbing rent has students accusing property rental businesses of taking advantage of the high demand for studio apartments in the university area to squeeze students for more than they ought to pay.

The student union, which conducted a price investigation of over 100 studio apartments near Semyung University last month, concluded that the advertised rent was absurdly high considering the fact that the school was located far from the heart of Jecheon city. These studios were found to be more expensive compared to similarly sized apartments in different areas throughout the city.

The asking price for studios around Semyung University was 3.5 million won to 4 million won for a year’s worth of rent. At the high end, rooms in certain newly built residences were available for 6 to 7 million won per year.

The majority of the rental property businesses holding the rooms insist that a year’s rent be paid upfront. This arrangement has irked the students, since the businesses are demanding rent even for the vacation months when the students do not stay near the school or in Jecheon.

A spokesperson from the student union said, “Not including vacation, the actual time students spend in their rented properties is only seven months out of a year, so for it to be required to pay for all 12 months all at once is excessive. Since studios around the university are limited, the rental property businesses are abusing their advantage.” 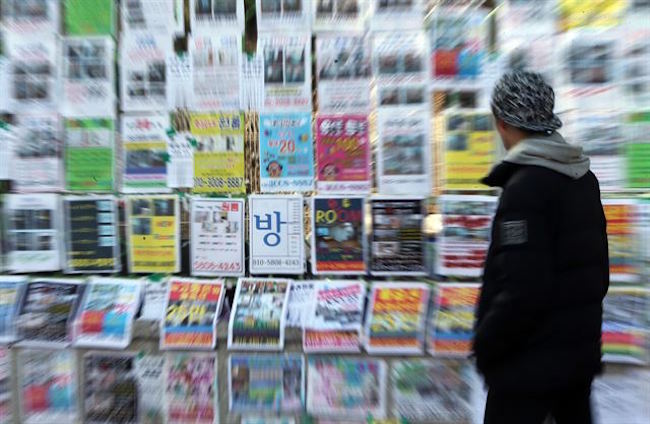 A young man looking at a wall covered with ads for rooms (Image: Yonhap)

The accused on the other side of the aisle have not stayed silent on the matter. “Monthly rent is not that expensive since there is no security deposit required and utilities are covered by the payment,” said one rental property operator. “There are studio apartments within ten minutes walking distance of the university that stand empty despite the owners lowering their prices.”

Another operator said prices around the center of Jecheon were comparable to those in the university neighborhood and added that the rents were not unspeakably high.

The student union’s research did turn up certain studio apartments that were available for a cheaper 2.2 million won in yearly rent. Excluding utility payments, yearly rent for studios in the heart of the city ranged from 2.5 million won to 4.5 million won, roughly similar to the prices around the university.

The asking price for studios around Semyung University was 3.5 million won to 4 million won for a year’s worth of rent. (Image: Yonhap)

The friction between students and rental property businesses has led to growing calls for universities to expand dormitory services. Currently, 29.6 percent of North Chungcheong Province university students – the province where Jecheon is located – and 20 percent of their counterparts in the Seoul-Gyeonggi-Incheon area are making use of dorms.