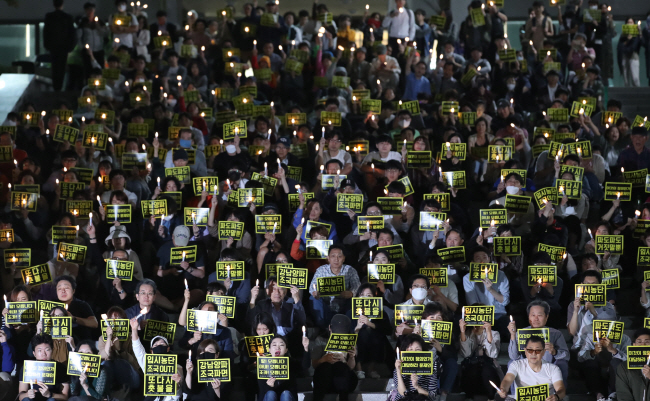 Students and alumni of Seoul National University hold a candlelight vigil at the university’s campus in southern Seoul on Sept. 19, 2019. (Yonhap)

It is the first time that anti-Cho rallies have been held simultaneously at Seoul National University (SNU), Korea University and Yonsei University since the corruption allegations involving the Cho family surfaced last month.

At the campus of Korea University in northern Seoul, some 200 participants gathered at a square and called for Cho’s resignation while holding up their smartphones with the flashlights turned on.

“We can’t trust the Republic of Korea’s law and the prosecution’s righteousness to Cho, who is currently under investigation,” a group of students from Korea University said in a statement.

“Fairness and equality fade, and we have to rise up and restore them.”

Korea University has been at the center of allegations that Cho and his professor wife helped their daughter build a portfolio that landed her in the university.

Cho’s daughter was listed as the primary writer of a pathology paper as a high school student in 2008 after she took part in a two-week internship program at a medical science institute at Dankook University.

She cited the experience when she applied to Korea University in 2010.

Korea University students have called for Cho’s daughter’s admission to the university to be canceled and for Cho to resign.

At the same time, some 200 students and alumni of Yonsei University, which is not directly related to the alleged irregularities by the Cho family, held their first rally against the justice minister.

“Cho has undermined the values of equal chances, fair process and righteous results,” their statement read. “We demand Cho resign.”

Students of SNU, Cho’s alma mater and where he formerly taught, held their fourth candlelight vigil to demand Cho’s resignation at the Gwanak campus in southern Seoul. 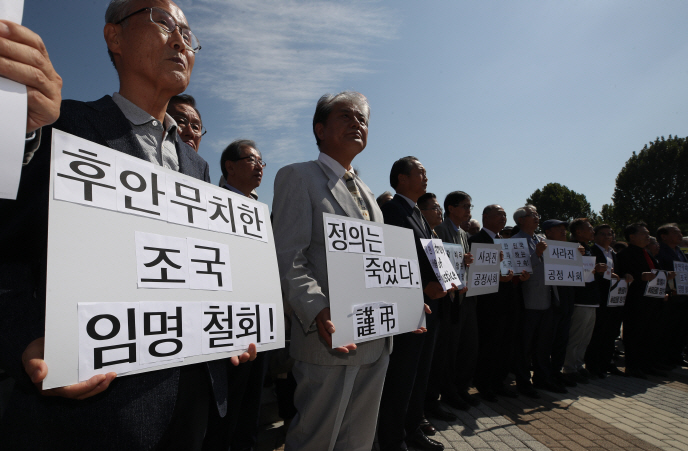 Current and former university professors hold a news conference in front of Cheong Wa Dae in Seoul on Sept. 19, 2019, to call for Cho Kuk’s resignation as justice minister. They also issued a statement signed by 3,396 current and former professors. (Yonhap)

The prosecution is looking into a suspicious investment by family members in a private equity fund, while Cho’s wife was indicted for allegations that she fabricated a school certificate for her daughter.

Cho denied his role in the allegations during a parliamentary confirmation hearing held on Sept. 6.

According to a poll of 504 adults nationwide conducted by Realmeter Wednesday, 55.5 percent said Moon’s appointment of Cho as a Cabinet minister was the wrong decision, while 35.3 percent expressed support for the appointment.

In a related development, about 3,400 incumbent and former university professors issued a joint statement calling for Moon’s dismissal of Cho as justice minister.

The statement, signed by 3,396 current and former professors at 290 universities and colleges nationwide and released in a news conference in front of Cheong Wa Dae, said Cho’s appointment as justice minister has destroyed social justice and ethics.

“President Moon has struck down social justice and ethics by appointing Cho as justice minister, even though his scandal-ridden wife was indicted on suspicion of doctoring a document to help their daughter gain admission to a graduate school,” the statement read. It called on the president to pick a new minister who can be approved by the public.

Min Hyun-sik, a Korean language education professor at SNU, said he attended the news conference to help safeguard South Korea’s constitutional identity and campaign against lying by officials, noting that more than 200 SNU professors had signed the statement.

The main opposition Liberty Korea Party (LKP) plans to hold its third candlelight vigil in front of the Sejong Center for the Performing Arts in downtown Seoul on Thursday night to further press for Cho’s dismissal.

Since last Wednesday, LKP Chairman Hwang Kyo-ahn, a dozen incumbent and former LKP lawmakers and a large number of lower-ranking party officials at LKP chapters nationwide have voluntarily shaved their heads to express their resentment over Moon’s appointment of Cho as his justice minister.