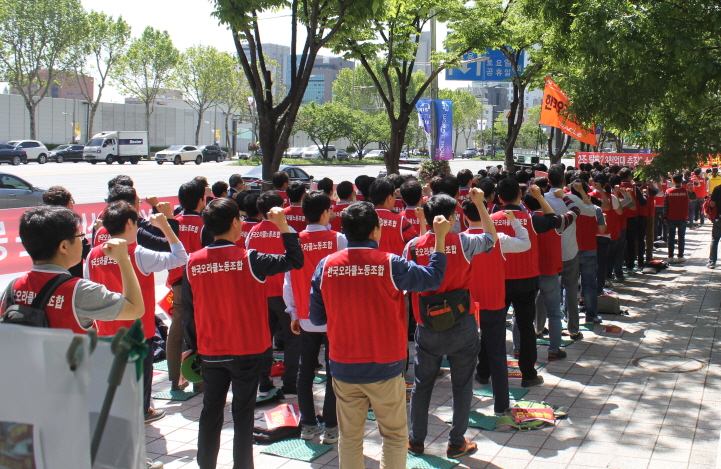 SEOUL, Jul. 3 (Korea Bizwire) — Tomorrow marks the 50th day that workers of Oracle Korea, the IT firm headquartered in the U.S., have been on strike, breaking the record for the longest strike by workers of an overseas IT firm.

The previous record was held by workers of Fujitsu Korea for an 18-day strike in 2000.

Although Oracle Korea has in the past been well regarded for the treatment of its 1,200 employees, the employees currently on strike tell a different tale.

At present, 500 workers are members of the union.

Company engineers who have joined the strike say that the reality is different from the view from outside. Some members of the labor union state that their basic salaries have remained frozen for the past ten years.

Approximately half of an employee’s salary depends on incentives, which puts many Oracle workers under pressure to generate tangible financial results for the company.

The labor union points out a structural weakness that also adds to the complaints that current employees have about the company.

At Oracle, a manager leads each team in which team members must meet a quota set by the manager.

In order to get one’s full salary, each employee must satisfy his or her manager’s monthly target. If unmet, the salaries of individuals are, in essence, reduced.

As each employee’s salary is determined by the manager, critics say that this gives managers too much power, with some setting low targets for those they favor. For those not on good terms, unattainable goals are set.

Eventually, those who continue to miss their target quotas are put on a “program” which most employees say is merely a precursor to being laid off.