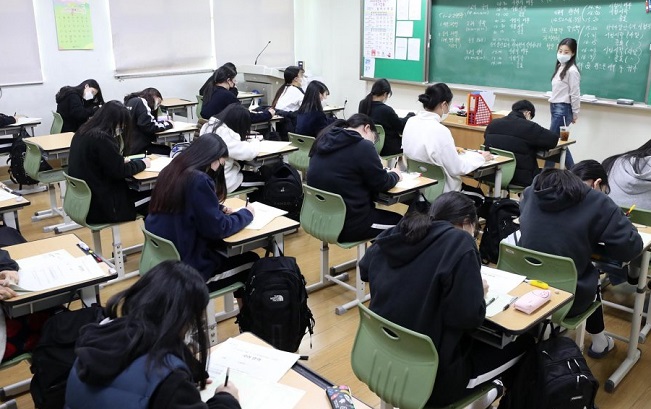 SEOUL, June 15 (Korea Bizwire) — About 8 out of 10 middle and high school students believe that difficult mathematics exams produce students who ultimately decide to give up studying math, a poll showed Tuesday.

According to a survey conducted jointly by Rep. Kang Deuk-koo of the Democratic Party and a civic group “The World Without Worries About Private Education,” 88.4 percent of high school students, 74.2 percent of middle school students and 64.3 percent of parents replied that school math exams push some students to give up studying math.

This survey was conducted with the participation of 8,088 people, including 4,758 students at 90 middle and high school students across the country, 3,136 parents and 194 math teachers.

In response to a question about the level of difficulty for school math exams, 60.5 percent of middle and high school students and 63.4 percent of parents replied that the content on math exams is harder than what is studied during class.

At 64.4 percent, close to two-thirds of math teachers said that they make harder questions for exams to better assess the level of students.

As for the type of math exams, 75.4 percent of middle and high school students and 75.3 percent of parents said that school math exams make students focus only on solving problems within a limited time.

At 68.6 percent, a majority of math teachers also said that private education is helpful in preparing for school exams.