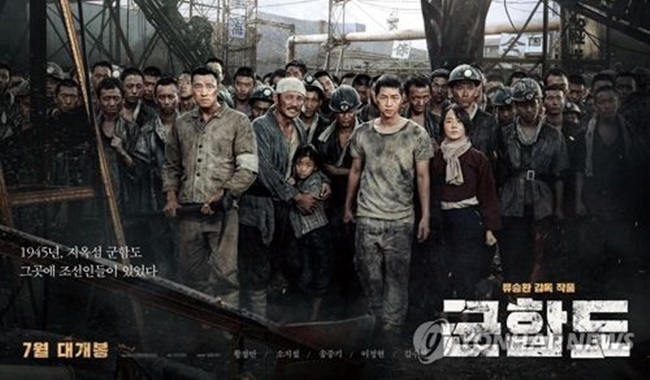 This image released by CJ Entertainment shows a promotional poster for “The Battleship Island.” (Image: Yonhap)

According to CJ Entertainment, the movie will open in the United States, Canada, France, Australia, New Zealand, Singapore, Malaysia, Thailand, Vietnam, Taiwan, Hong Kong, Indonesia, Macao, Brunei in August and in the Philippines in September.

“Many overseas distributors expect it to be a box-office smash in South Korea this year,” said Choi Yoon-hee, head of CJ Entertainment’s overseas distribution team. “They chose the film to compete with big-budget Hollywood films in the highly competitive summer market and are now gearing up for its release.”

The rights to the film were earlier sold to 113 countries around the world, according to CJ.

Based on the hidden history of Japan’s Hishima Island where many Koreans were forced to work and died during World War II, the action flick tells the story of the Korean laborers who risk their lives to escape the island. Korea was a colony of Japan from 1910 to 1945. The island, better known as “Battleship Island” for its shape resembling a warship, was designated a UNESCO world heritage site in 2015. The film stars A-list actors Hwang Jung-min, So Ji-sub and Song Joong-ki, and actress Lee Jung-hyun. Its domestic release is set for July 26.’