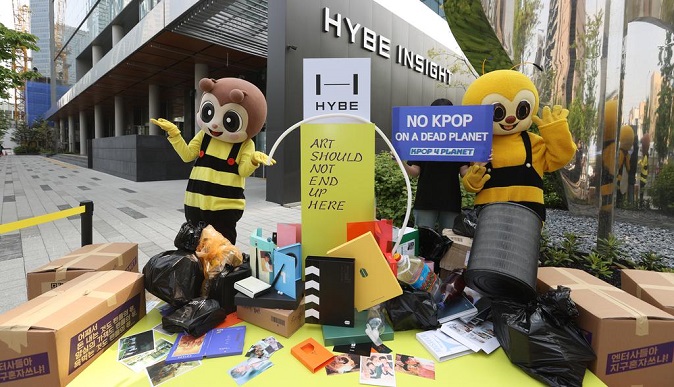 K-pop fans stage a protest at the headquarters of Hybe, the agency of K-pop supergroup BTS, in Seoul on April 21, 2022 to demand that that the K-pop agencies should take environmentally sustainable options when it comes to artist production. (Yonhap)

SEOUL, July 25 (Korea Bizwire) — It’s common practice for some K-pop fans to mass-purchase K-pop albums but throw most away after removing only photo cards or invitation cards for fan meetings.

Since they throw the CDs away, the excess copies end up becoming plastic waste.

The number of K-pop CD albums sold in the first half of this year was estimated at about 35 million, the highest since data started being compiled in 2010, according to data disclosed recently by Circle Chart, which reports accumulated sales and streams.

The actual sales volume is expected to be even higher since the data covers only the top 400 albums.

“Purchasing CDs becomes a tool to take part in fan meetings,” said a 27-year-old office worker surnamed Baek, who claims to have about 600 different copies of K-pop albums.

As self-criticism grows over the practice of mass-purchasing among K-pop fans, K-pop labels are attempting change, including the use of eco-friendly materials in the production of CD albums.

However, some experts pointed out the need to fundamentally change the culture of focusing on album sales.

“If albums are mass-produced and mass-purchased simply for having higher ranks on the charts, it’s natural to raise the question if the increase in sales does have any actual meaning,” culture critic Kim Heon-sik said.