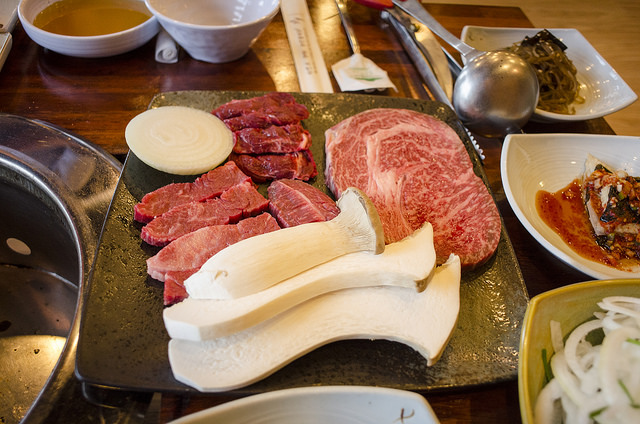 SEOUL, July 27 (Korea Bizwire) — Office workers prefer to sit next to colleagues that are good at grilling meat at company dinners, rather than those who are fun, a new survey shows. Pork and soju were the preferred food and beverage choices, outnumbering chicken and beer.

According to a survey conducted by Hanwha Life Insurance over the past month on their official Facebook page, 65 percent of the 18,618 respondents answered that they preferred pork and soju. This was a larger number than those who selected chicken and beer (35 percent).

Table seats (65 percent) were preferred to floor seats (35 percent). Among those who selected table seats, 71 percent were women. They explained that floor seats were uncomfortable for them when they were wearing skirts.

To the question, ‘Who do you want to sit next to?,’ 78 percent answered ‘colleagues that are good at grilling meat’, which exceeded ‘colleagues that are fun’ (22 percent). The reasons behind their choices were that they seldom had the chance to eat well-grilled meat, and they drank more when they sat beside fun people. There were also answers suggesting that any seat far from the boss was fine.

Colleagues that wanted to keep drinking on and on were disliked more (77 percent) than those who headed home right after dinner (23 percent).

As a next day meal to cure a hangover, people preferred a ‘hangover soup’ called haejang-guk (76 percent) to ramen noodles (24 percent).