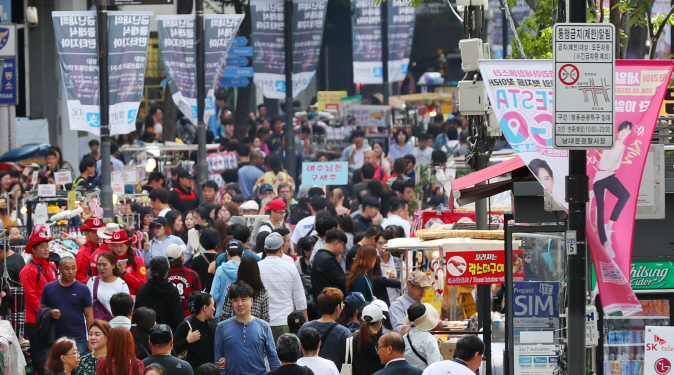 Compared to the third quarter of last year, there has been an overall increase in the duration of stay, revisits, and other indexes related to tourism. (image: Yonhap)

Querying 1,500 tourists who visited South Korea between July and September of this year, the survey showed that the share of tourists who bought clothes and apparel increased from 52.1 percent last year to 57.7 percent, while those who bought shoes also went up from 22.7 percent to 32.5 percent.

K-pop fever also boosted sales of related goods, with the share of tourists purchasing such products increasing from 10.3 percent to 14.4 percent. Cosmetics continue to comprise the majority of purchases at 73.4 percent.

However, the drop in visits from Chinese tourists and an increasing number of online shopping malls has shrunk the share of purchases by 3.1 percent compared to last year.

Most tourists (65.1 percent) went to duty free stores in downtown areas for shopping.

“Tourists typically prefer cultural experiences over sightseeing,” said a Seoul city official. “Their area of interest is going beyond K-beauty to K-fashion.”

Compared to the third quarter of last year, there has been an overall increase in the duration of stay, revisits, and other indexes related to tourism.

More than 1.2 million tourists visited Seoul in October, a 31.1 percent increase from last year. Chinese tourists were the most numerous, with 370,000 visiting Seoul.

The total number of tourists visiting Seoul from January to October was 9.99 million people. Japanese tourists have increased the most in number, while Chinese tourists are also making a slow but gradual comeback.

The Seoul Metropolitan Government expects the number of tourists to surpass 12 million by the end of this year.