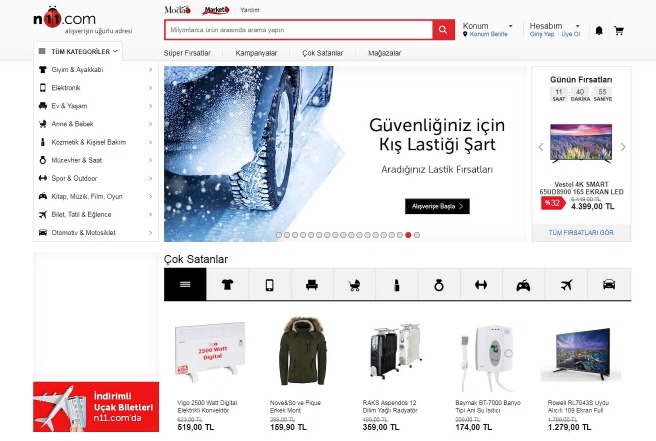 The n11 website is operated by a Turkish enterprise that was created via a 50-50 investment venture by Korea’s SK Planet Co. and a Turkish company in 2012. (image: Yonhap)

SEOUL, Nov. 15 (Korea Bizwire) — An annual sale offered on November 11 by the Turkish edition of the popular Korean e-commerce website 11Street has become Turkey’s most popular “shopping day” just three years after it was first held.

The website known as n11 (www.n11.com) revealed yesterday that it had recorded approximately 50 billion won (US$4.41 million) in transactions during a one-day sale that kicked off at 11 a.m. on November 11.

This was a 73 percent increase from last year’s sales volume during the same promotion.

In just 24 hours, 21,000 mobile phones were sold, and 105 cars that were procured specifically for the special sale sold out in just one hour.

The n11 website is operated by a Turkish enterprise that was created via a 50-50 investment venture by Korea’s SK Planet Co. and a Turkish company in 2012.

In 2015, the website’s third year in operation, n11 adopted a special sale event on par with Black Friday in the U.S. and Singles’ Day in China.

N11 was able to gain the trust of Turkish consumers in a short amount of time, becoming the industry’s top player. But n11’s progress has not been without hurdles.

Amazon set up shop in Turkey in September, and the Chinese e-commerce giant Alibaba has announced an investment in a local competitor.

However, n11 is confident that it will continue its success despite the intense competition coming its way.

“Although it’s true that competition has gotten fierce, n11 will be able to maintain its position because of its role as the market’s pioneer,” said one n11 executive.